THE VAGINA INDUSTRIAL COMPLEX: Confessions of a Pussmonger 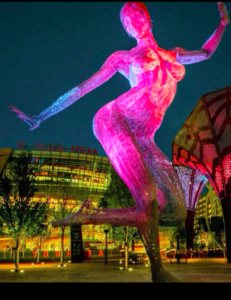 But wait, this latest vagina is actually Art: a 40′ statue of a nude woman first exhibited at Burning Man 2010 called “Bliss Dance,” said to represent femininity at its free-est. Ever the hater, I couldn’t stand the fuckin’ thing back in ’10 at Burning Man (T&A in the guise of female empowerment…YAWN), and now that it towers over hordes of philandering middle-management Billy Joel fans and drunken frat boys, I find it even more tiresome. I understand that the artist built it with lofty ideals about reclaiming femininity without fear, but its current setting robs it of any intended significance. Here in Vegas, it’s just another giant, glowing Pussy For Sale. 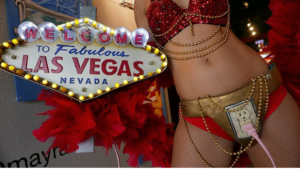 As a pussmonger myself, I know a little bit about the matter. Pussy — or the promise thereof — is big fucking business in Vegas (as it is the world over — but one of the things I love about Vegas is its transparency; we don’t even pretend). And I make no bones about it: I make my living selling pussy! Maybe not the actual pussy itself, but the dream of it — as a nude model, I flaunt my pudenda to all and sundry, for a price. And I have very little patience for women who shame me for it.

These are actual BILLBOARDS in Vegas!

The fact is, I am far from alone in my pussmongering. All I have to do is look around me at the gym — I’m surrounded by women in huffing, puffing, sweating pursuit of a tight pussy (and the rest of the pussy life-support system). Why shame each other, gals? We’re all in this together! The truth is, few of us are using our college degrees to make a living; most of us have chosen to use our bodies, instead. So let’s stop judging each other.

“Now wait,” I can hear some self-righteous balloon-breasted service-bot saying, “I’m a bottle waitress, not a prostitute.” Don’t kid yourself, sister! If you’re working for tips anywhere on the Strip, you’re selling puss, just like the rest of us. We are all part of the Vegas Vagina Industrial Complex…some of us are just coyer about it than others. And since I have very little tolerance for coy, I’m here today to put it all out in the open. So to speak.

After years of wading ass-deep in the murky pheromones of the Vegas tourist economy, I have classified the five main subtypes of pussmongers in town. Don’t deny it — you know it’s true!!!!

Out of all the subtypes, this class earns the highest respect from me because they operate basically without pretense: pussy for sale, cash money accepted. I have zero sympathy for thieves and scammers, and minimal sympathy for those beholden to pimps…but to the rest of the hardworking Vegas prostitutes, I salute you (I’m not technically sure the “honest hooker with the heart of gold” exists outside of Hollywood…but sheer numbers insist there must be at least a few). 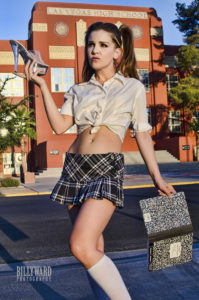 This class earns the second highest respect from me. Again, thieves and scammers aside, an honest stripper works her ass off — both physically and with her mental skills, such as they may be — by giving guys exactly what they want: the promise of pussy, up close and personal. Why shame a stripper for her work? She’s only doing what the rest of us do — just more openly. Whereas other women on this list cloak their pussmongering in bullshit…strippers are literally dangling their carrots right in front of his stick. I applaud such honesty.

*Note: I basically lump myself into this category, since the only difference in much of my modeling is the label of “art” plastered on the transaction. But realistically…there are tons of female artists, yet I can count the number of women who have hired me on half of one hand. 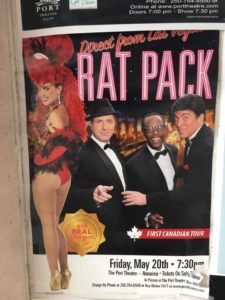 Any kind of female performer in a Strip show — not to be confused with a strip show, though there are in fact several Strip strip shows — is basically selling her pussy as well, and I don’t care how many years of jazz/tap/ballet you took to get there. They’ll kick your ass to the curb if you get too fat — and why do you think that is? So that Joe Sixpack from Rustbucket, Pennsylvania can fantasize about railing you instead of the tattooed manatee of a wife he’ll be drunkenly laboring over later that nite. Even if you’re not parading around topless with 50 pounds of rhinestones up your ass, your pussy is still being used to sell show tickets — SURPRISE! Even those artsy fucking Cirque shows have that number with the hard-bodied split-legged Russian on silks. And I’ll give you one guess as to what most guys are thinking when they see a 90 lb. Chinese acrobat with her ankles behind her head. 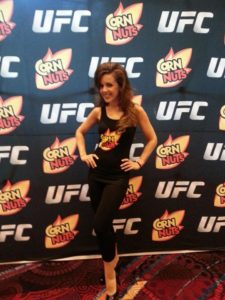 This class is the worst in terms of judginess and denial, and their sour grapes stem from the fact that they don’t make anywhere near as much money as strippers and hookers. But, by golly, they’re nice girls working for an agency!! (Not that kind of agency!) All dolled up in Bebe’s sluttiest interpretation of corporate attire, using puss to lure Willy Loman and the rest of the lemmings into buying one shitty planned-obsolescent widget after another. Do you think they’d hire you if you didn’t have a vagina? Ask all them male tradeshow models how much work they book!

Finally, the corporate-sanctioned cooze: casino employees. It seems like every bar, pool, blackjack pit and keno lounge on the Strip is staffed by pussy — although here at least it’s of varying vintage, as thanks to the Culinary Union they can’t always fire these broads once their juices run dry…which is why you get all these complaints about the cocktailsauri at Caesars Palace. Old pussy = ewwww = get thee to pasture, nag! But don’t worry, guys…the Vagina Industrial Complex is an efficient union-busting political machine as well. You won’t suffer for long! 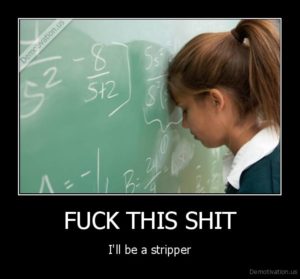 Anyway, as a cog in the Complex, I’ve obviously spent a lot of time thinking about this. I didn’t intend to make a living using my vagina; I went to college and read a lot of books and made it all the way through pre-calculus before giving in and going the lazy route. Moving to Vegas seemed a no-brainer; this town, more than any other, is powered by puss. Literally! Without pussy (or the promise of it), Vegas probably wouldn’t exist — why else drive all the way to the middle of the desert to play poker with a bunch of balding sad sacks when you could do it in your own basement? 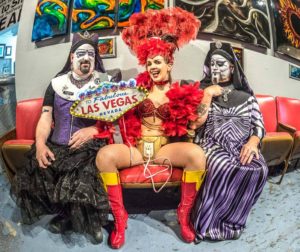 I made this point recently at the 12″ Inches of Sin IMMERSIVE art happening, where I was invited to perform as the Electric Vagina. In the past I’ve used my Electric Vagina to power drills, ice guns and blenders…but I can’t keep falling back on the same tired old shtick. No one likes a stale vagina — cocktailsaurus! It was time to devise something new.

And the idea came to me: a literal representation of pussy power in Las Vegas — the famous neon sign itself, plugged into my crotch. Why not?! 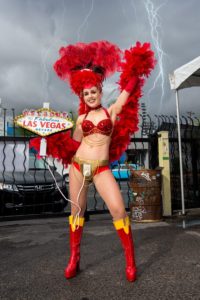 Without pussy, the Strip would go dark in no time — no tits, no glitz; no gash…no flash.

Loosest slots in town?! Pussy has always been the most powerful money vacuum on the Strip.

53 Responses to THE VAGINA INDUSTRIAL COMPLEX: Confessions of a Pussmonger