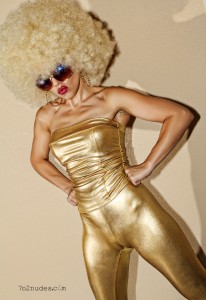 I finally got some photos back from my amazing shoot with the fabulous Michael Maze the other week! To the left is “SuperToe.” What with my affinity for shiny spandex pants and my aversion to wearing underwear, it was bound to happen sooner or later!

To the left is a variation on the same theme…I’m wearing this really cool old 1970s suede jacket that I got at this amazing thrift store in San Jose, CA where I used to shop all the time when I was in college there. This place was AWESOME! It was called Community Value Center, and I bought tons 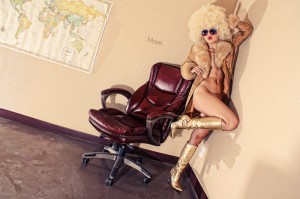 of cool stuff there for super cheap back in the day (it’s not there anymore, alas). My sister and I used to buy all these crazy outfits, and then make up back-stories for them. Haven’t you ever wondered what went on in vintage clothes before you bought them?

For this jacket, we decided it used to belong to a secretary in New York City who got pregnant by her boss and had to have a back-alley abortion which resulted in her untimely death, and the donation of her jacket to charity. My sis even did a black&white photojournalism story about it back in the mid-’90s, with me posing as the secretary going about my deadly business. It was awesome!

The blonde afro wig is part of my extensive wig collection. I have about 10 wigs, and I totally dig wearing them when I’m too lazy to wash my hair. They also come in handy at Burning Man, where you can’t really wear your hair down without it becoming hopelessly snarled and coated in alkali dust. 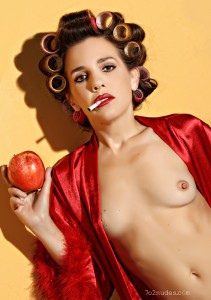 Now this next one is a personal favorite. I call it “You kids get off the God damn roof!” Living in Vegas, I don’t ever get my ass out of bed until noon (or later)…and then it takes me around 4 hours of coffee and Internet before I can actually get myself together to face the day. Sometimes I’ll go out to check my mail in my robe, and I feel hopelessly dissolute when there are kids walking home from school. One time I overheard them say, “Did she just get UP?” Yes, Sonny….yes, I did. And if I catch your fat ass on my roof again, I’m gonna throw this apple at your face as hard as I can! 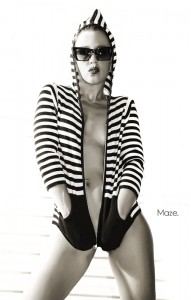 Now here’s a fun one! I had this weird old striped hoodie in my closet from dog-knows-when, but I guess I’m glad I never throw anything away, because it came in handy for my take on Dieter’s Dance Party! I was also channeling Australia’s Mike Batt, an early ’80s musician who cooked up this kooky futuristic rock opera called “Zero Zero,” all about a world of the future where Love has been outlawed. The movie was broadcast on Australian TV back in the day, and somehow my mom got ahold of the soundtrack LP and we used to listen to it all the time when we were kids: it was all black-and-white avant-garde ’80s futurism. TOTALLY cool! If you can find a copy of this movie…LET ME KNOW! I need to see it! 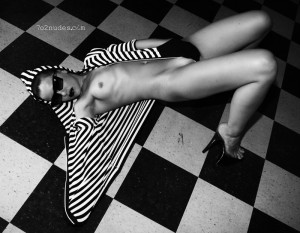 Now this last one is another variation on the Zero Zero theme…had to take advantage of the awesome tiled floor in his new warehouse/studio. Incidentally, his studio is right around the corner from the Red Rooster swinger’s club. For those who don’t know, the Red Rooster is THE swing club in Vegas. Sure, other clubs might be fancier (Green Door, Power Exchange)…but the Red Rooster has been going strong for over 20 years, operated by a sweet swinger couple out of their private residence…which has been added onto over the years so that it now resembles a suburban sex compound. (For more info, see my review of this club at yelp.com/biz/las-vegas-red-rooster-las-vegas#hrid:jZ7GeY_viZuYT2dkd08_SQ)

I also did another super-fabulous photo shoot this week…but those photos will have to wait for another post. Coming soon to wonderhussy.com!

I am a foul-mouthed, flat-chested bon vivant and adventuress who likes to curse, drink, smoke and run around nude, and I refuse to kow-tow to the bourgeois moral code of the day. I’ve lived in Vegas over ten years, and have a few stories to tell. I roll around town in a truck stocked with a Breathalyzer and a swizzle stick, a spare pair of panties and two stun guns. Don’t fuck with me!
View all posts by wonderhussy →
This entry was posted in Uncategorized and tagged camel toe, modeling, nude, photography, swingers club, vegas. Bookmark the permalink.

5 Responses to The Adventures of SuperToe