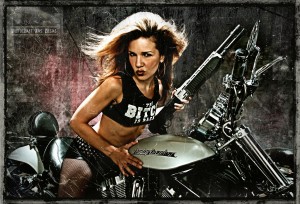 I’ve always felt an affinity for bikers. I think this has to do with low self-esteem issues: when I hang around hipsters, or artists, or Young Professionals, I feel inadequate, weird and immature. But bikers…they don’t judge! (At least not if you’re a white woman of childbearing age.)

I’ve had a few biker friends over the years, and for awhile I even worked for Harley-Davidson, doing promotions. It’s fun, playing biker bitch! I am a total girly-girl intellectual, but I find it very cathartic to put on some 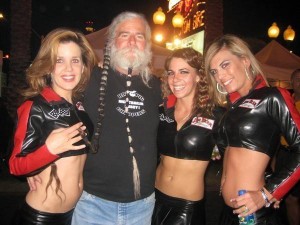 old jeans, boots and a skimpy top, then go carousing around the desert or local biker bars, chasing the ideal of the Biker Woman: long, scraggly hair, sunkissed, leathery skin, squinty eyes, flapjacks and a buzz at 10:30 on a Sunday morning.

Thankfully, my good friend Muscles Manischewitz is a Harley rider…so I get to ride along on a lot of adventures. The first ride we took was out to the brothels in Pahrump, for lunch at Sheri’s Ranch. (They have a friendly sports bar there that is open to the public, and one of the prostitutes will give you a free tour of the brothel if you want. I highly recommend it!) 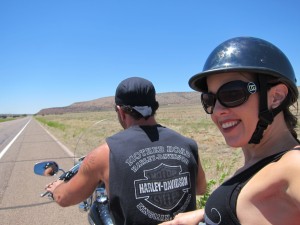 Aside from Pahrump, we’ve also ridden around the surrounding desert to weird places like Searchlight (home of Senator Harry Reid), Nipton (creepy desert outpost where we met some friendly Goth kids), Crystal (suburb of Pahrump that is home to the SHITTY brothels, and the “Brothel Art Museum”), Tecopa (home of the fabulous Pastels Bistro) and good old Rosie’s Den, a biker hangout along U.S. 93 South in AZ. 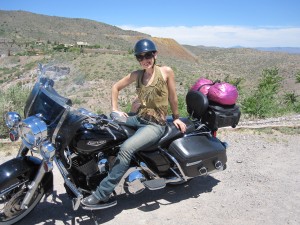 Well, this past week Muscles invited me on a longer trip, down into Arizona to the mystical, spiritual, hippy-dippy New-Age mecca of Sedona. This was a 3-day trip, and I was suppposed to jam all my needs into one measly saddlebag. HA! I overflowed into a hot pink lamé duffel bag, which Muscles begrudgingly allowed me to bungee to the back of the bike. NOT very hardcore…but super cool! 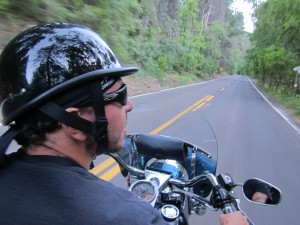 So on Thursday morning we cruised south from Vegas to Kingman, AZ where we had lunch at the old-time Flyover Country Grill, aka Cracker Barrel. I was trying to watch my girlish figure, and Muscles eats A LOT, so I really had to pace myself on this trip!

From there, we went south through some beautiful forests and mountains to Sedona, which is basically a tourist-trap town for the 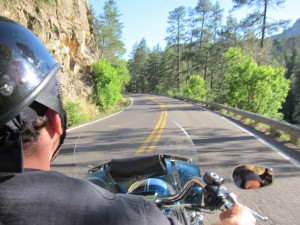 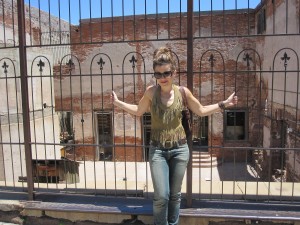 Things were just getting interesting in the Best Western jacuzzi — I was sipping a bitch beer and talking to a New Age physician about minerals and “non-traditional” medicine — when the front desk made us shut down and go inside. Boo! But it was all good, because we had to get up and move along the next morning to uber-kooky Jerome, AZ… another little artists’ town up in the hills. 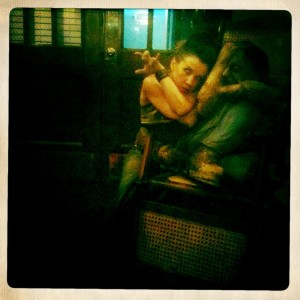 world’s biggest kaleidoscope store…FUN!), we had lunch at the Asylum, which used to be a hospital back in old-timey miner days.  After lunch, I dropped $25 on a pair of studded leather pasties and then we blew town, cruising further along to Prescott, AZ…which is statistically 93% white, and bills itself as “Everybody’s Home Town” (if you’re white).

Feeling that Prescott would be a nice, safe place for two white people to spend the night, we hit the Springhill Suites, but unfortunately there were no New Age 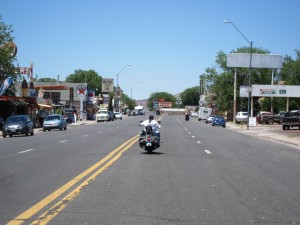 doctors in the jacuzzi here, so we went to bed early. The next morning it was back to Vegas. I had to be at work by 6pm, so we took the scenic route along Old Route 66, stopping at the Roadkill Cafe for lunch and then coming into Kingman from the back…through some verrrrrry depressing country. I don’t know how anyone handles living in Kingman — I’d go nuts!

Anyhoo, it was very refreshing to get out of town for a few days, and just blow along on the open road…although when I got home, I was coated in dead bugs and road grime, with a worse case of swamp ass than I got even working the mascot convention!

But I’m back now, and promise to have some salacious adventures soon. Ta-ta!

I am a foul-mouthed, flat-chested bon vivant and adventuress who likes to curse, drink, smoke and run around nude, and I refuse to kow-tow to the bourgeois moral code of the day. I’ve lived in Vegas over ten years, and have a few stories to tell. I roll around town in a truck stocked with a Breathalyzer and a swizzle stick, a spare pair of panties and two stun guns. Don’t fuck with me!
View all posts by wonderhussy →
This entry was posted in Uncategorized and tagged biker, harley, Jerome, Kingman, motorcycle, Prescott, riding, road trip, Route 66, Sedona, vegas. Bookmark the permalink.