Ever since I found out my memoir doesn’t have to be finished until July 31, I’ve been doing alllllllllll kinds of crazy stuff other than write. Writing is for losers…or for those who have no actual LIVING to do! (This blog notwithstanding, of course.) 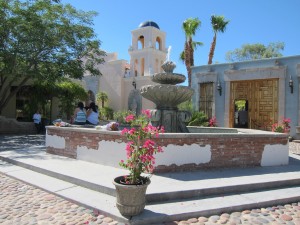 One afternoon, I went over to Michael Jackson’s old house. It was the 2nd anniversary of his death, so they opened the place up for fans to tour. Fun!

Back in 2008, Michael Jackson and his kids rented this weird old dilapidated sort of “mansion” in a really old neighborhood of Vegas…which happens to be right down the street from my own estate, Villa Sinvergüenza. While they were living there, I used to walk my dog down there all the time, hoping to catch a glimpse of the elusive superstar. Alas, I never did see him…but I ran into all kinds of crazy kids from all over the world, who would camp out across the street from his house 24/7, just in case he came out. It was insane! 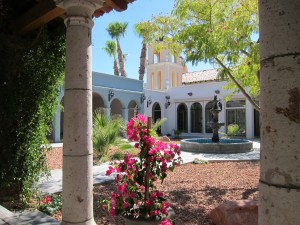 This was during a very lonely period of my life — I had just broken up with my boyfriend of two years, and he abandoned me with this albatross of an upside-down mortgage to pay on my own. It was a very trying time — not just financially, but emotionally! I was so lonely — I went from having someone to talk to every single day, to having no one. So I used to walk my poor dog around Michael Jackson’s neighborhood, singing melancholy Aimee Mann songs and hoping to make a new friend. 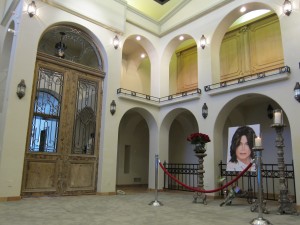 After awhile, I made some new friends and got on with my life. Then Michael Jackson died, and the house has just sort of just sat there ever since, growing weedy and Miss Havisham-y. I still drive by every once in a while…but no one lives there now. Still, it’s a BAD ASS house, with a bell tower, expansive grounds and a sort of Spanish Mission vibe. I’d totally buy it myself if I weren’t already balls-deep into one bad mortgage!

I have been a HUGE Michael Jackson fan for around 15 years, but I only met him once, when I was called backstage at the Sally Dingdong show to take photos of him and Ms. Dingdong together. It was fan-fuckin’-tastic! I didn’t really get to chit-chat with him, but he was so polite and cute and well-put-together (his nose looked fine, not like it was falling off at all) that I became an even bigger fan. They even ended up running my photo on Entertainment Tonight, but of course I didn’t get a photo credit, being as I am just a lowly camera girl 🙁 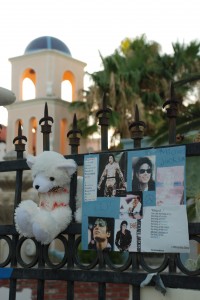 Mijac was supposed to come in and take over the Colosseum after Sally’s old show ended…but he died, so they ended up just having to recycle Sally Dingdong’s show again. In her new show, she does this big, treacly, overblown tribute to him where she dresses up in a Michael Jackson costume and sings some of his worst songs, like “Ben” and “Man in the Mirror.” YAWN!

But I saw on Oprah’s show where Michael Jackson’s daughter, Paris, recalled climbing onto the roof of their Vegas home with her dad, eating candy and looking at the lights of the Strip. Now THAT’s cute. 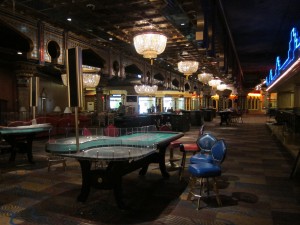 Then, later in the week I went over to check out the liquidation sale at the Sahara. This legendary hotel-casino finally shut its creaky doors in May, and ever since then they’ve been selling off everything they can to make a buck off the treasure-hunting public. All the cool stuff — ashtrays, camel lamps, and anything branded “Sahara” — was snapped up within the first couple of days. By the time I got there, there wasn’t much left but junk. 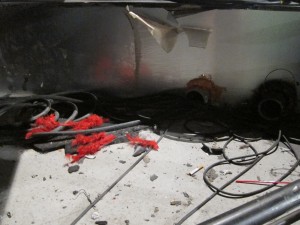 Most of the shit there was junk to begin with, since that was one dumpy-ass old hotel…but my friend and I were determined to find something cool. Unfortunately, everything was ridiculously overpriced — even a battered old trashcan was going for $85. But my intrepid friend and I ignored the signs and explored every single back hallway of that hotel, from the employee dining room to the cocktail waitresses’ locker room to the old dressing rooms behind the theatre. In our explorations, we stumbled upon a couple of storage rooms that had some semi-cool stuff in them…so I may have jacked a few items 🙂 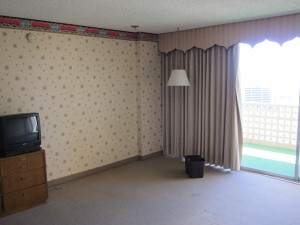 The main thing we wanted to look at were the rooms where Elvis and the Beatles stayed, back in the day before the Sahara was a 5th-class dump. The Beatles only played Vegas once, back in 1964, and while in town they stayed in a suite on the 23rd floor. It was here that John Lennon was supposedly busted with two thirteen- or fourteen-year-old girls in his room. Bad Peacenik! This being before our current litigious era, he was able to pay off the girls’ mom sufficiently that she never filed an official complaint.

Then we went up another two floors to the Presidential Suite, where Elvis and Ann-Margret were said to have holed up during the filming of Viva Las Vegas. Who knows what sort of sexy shenanigans those two got up to while ensconced in this luxurious suite?? Did Ann-Margret lick peanut butter from Elvis’s banana? We may never know… 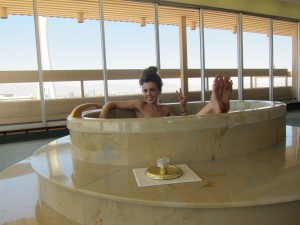 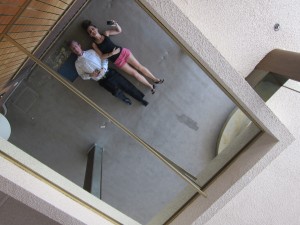 All I can say is, this suite was RETRO FABULOUS! It would have been an awesome spot for a photo shoot, had I known about it before it was too late. Still… it’s only cool on an ironic level. If I was a legit high roller, and the Sahara tried to put me up in these campy digs… I would get the hell out and go gamble somewhere else!

After wandering around every inch of the Sahara for a few hours, I went back downstairs and paid $4 for a votive candle holder and some Sahara-branded shot glasses. Gotta have some souvenirs! As I left, I bid adieu to the fabulous Sahara… it was without a doubt the last time I’ll set foot in that dive again. I’m sure they’ll be imploding her as soon as the economy turns around…meanwhile, here are a few more photos from the last days of this raggedy Grand Dame. 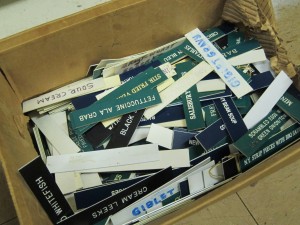 Left: a bunch of labels from the buffet, for gross, old-fashioned dishes like Broc Normandy and Giblet Gravy. YUK! 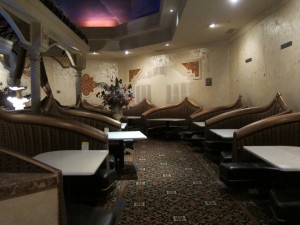 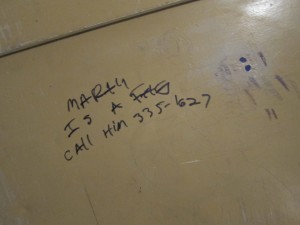 Left: Newsflash!! According to the service elevator, Marty is a Fag! Call him!!

I am a foul-mouthed, flat-chested bon vivant and adventuress who likes to curse, drink, smoke and run around nude, and I refuse to kow-tow to the bourgeois moral code of the day. I’ve lived in Vegas over ten years, and have a few stories to tell. I roll around town in a truck stocked with a Breathalyzer and a swizzle stick, a spare pair of panties and two stun guns. Don’t fuck with me!
View all posts by wonderhussy →
This entry was posted in Uncategorized and tagged beatles, Elvis, lennon, michael jackson, sahara, vegas. Bookmark the permalink.