Well everyone, I'm leaving for Burning Man tomorrow, so this is the last you'll hear of me until mid-Sept.

The event doesn't actually start until Sunday the 25th, but I got an early arrival pass from one of my campmates who needs help putting together his art car. Since I don't have much going on work-wise, I figured why the hell not! Seems like every year I go up there, it's never quite long enough…so this year, I'm going balls-out. I arrive Wednesday the 22nd, and probably won't leave until the Tuesday after the event (Sept. 4th). That's almost TWO FULL WEEKS on the playa! Yikes!!! I'm gonna be a filthy wreck after all this…but I have photo shoots scheduled pretty much as soon as I get home 😮 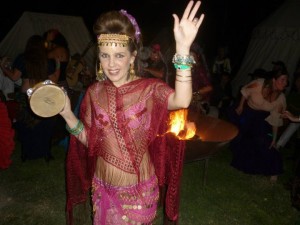 It should be interesting to see what it's like up there before the party officially starts — I imagine it's like the Renaissance Faire after-hours shenanigans, when all the families and day trippers leave and it's just the hardcore Ren geeks drinking mead and getting frisky after dark. (I went to one of those parties one year, and it was FABULOUS!) I've heard from others that the Saturday night before Burning Man officially opens is like the greatest party of all time…by then, everyone has finished their work, everything is all set up and ready to go, and that's when the REAL party goes down. We'll seeeeee!!!!

I was a little hestitant about coming up THAT early — I don't want to be that annoying bozo who's the first to get there, last to leave kinda thing. In fact, I had changed my plans and decided to go up Thursday instead…but my friend assured me he truly needs my help, so I

told him I could get all my shit together and be up there Weds. night. I plan to leave tomorrow morning around 9am, and cruise up slowly but surely at 60mph (my trailer tires can't take much more; I learned that the hard way last year, when I blew one out at 80mph). I figure I should arrive at Black Rock City around 7pm-ish….just enough time to set up my camper before dark.

For all you non-Vegas Burners, here's the route I'm taking. Basically, I will be traversing the entire state of Nevada from bottom to top, passing through some of the most desolate territory you've ever seen. Every hour or so you pass through an old mining town, but there are only a few towns of any real size along the way. It's mostly just sagebrush and brothels!

For the first time, I am making this trip by myself. Normally, my sister flies down from San Francisco to drive up with me….but she's in Israel with her busband right now, and won't be up until NEXT Wednesday. So it's alllllllllllllll me. If I break down out in the middle of nowhere, I'm S.O.L……so if you're driving along and you see a standed hippie…help a sister out, yo! 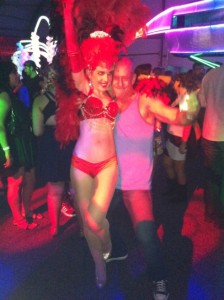 So aaaaanyhoo, I have exactly 10 hours to get all my shit together…so I better wrap this up quick. I didn't do much worth writing about in the last few days, anyway — mostly unpacking and laundry from my LAST trip, with plenty of back-breaking work at the Sally Dingdong show to pay the bills. The good news is, I'm slowly but surely eating away at the $14,000 nut I need to crack — I'm down to $11,600!! 😀 Once I've made this money, I will be able to pay off ALL my debts, plus have a comfortable cushion in the bank. And then I can FINALLY quit my photo job, and go full-time freelance! Yay!

I'm especially ready to quit now — they just informed me that from now on, when there is no show at the theater where I work, I am REQUIRED to work shifts at other hotels. WTF!!!!!! I went through ALL the TROUBLE of ditching my employer-sponsored insurance, and finding my own (at great expense)…for the PRECISE REASON that I DIDN'T want to work other shows! I ***HATE*** working at other hotels — and besides, it makes it really hard to plan other gigs around my schedule, if I don't know know what that schedule is, week to week 🙁 If I know I'll only be working in the one theater, it's a simple matter of checking the show schedule to see what nights I have off. Now, however, they want me to basically be at their beck and call…and that's a deal killer. I can't live like that!

Especially when there are so many other, much more fun gigs to work — like this awesome Zappos party I worked last Sunday, at the World Market Center downtown. A friend of mine was hired to provide atmosphere for this huge event Zappos had put on for their vendors at the MAGIC (fashion industry) trade show, so she hired a lot of her kooky Burning Man friends to wear costumes and walk around being atmospheric. She specifically requested I wear my showgirl costume (which I made BY HAND, I'll have you know), and it was a total blast. They had brought in all these crazy art cars and sound systems from L.A. and Nor Cal, so the whole parking lot was basically a mini Burning Man — the perfect warm-up for next week! She had glo-in-the-dark hula hoopers, fire spinners, the Dancetronauts and their Dancetrohotties, plus a ton of other wackos entertaining the crowd of fashion buyers. Normally I DESPISE the MAGIC crowd — it's my least favorite of all conventions; they're all stuck up and too cool for school fashion-y types — blecccchhh. But, thanks to the open bar at this party, everyone was super cool and super friendly. Good times were had by all!

I am a foul-mouthed, flat-chested bon vivant and adventuress who likes to curse, drink, smoke and run around nude, and I refuse to kow-tow to the bourgeois moral code of the day. I’ve lived in Vegas over ten years, and have a few stories to tell. I roll around town in a truck stocked with a Breathalyzer and a swizzle stick, a spare pair of panties and two stun guns. Don’t fuck with me!
View all posts by wonderhussy →
This entry was posted in burning man, Uncategorized. Bookmark the permalink.

4 Responses to I’m Off to Burning Maaaaaaaaaaaan!