Posted on January 1, 2015 by wonderhussy 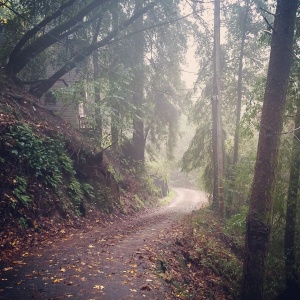 Since my shroom-fueled street jamboree at San Francisco’s Santacon, it’s been a mellow last couple of weeks. I’m not much of a winter gal to begin with, and to make matters worse I was holed up at my mom’s house…a cozy little cabin in the redwoods, up near the Russian River in Northern California.

I always get bogged down in lazy mode when I stay at my mom’s, and I think I figured out why. Like I said, her house is in the middle of a deep, dark, primeval rainforest — in the winter, everything is

My stone hasn’t rolled in so long, it’s starting to gather moss. Pic by my sis!

damp and drizzly and dripping with moss, and the woods are enshrouded in a thick misma of foggy mist that permeates your brain like a bad case of the Victorian vapors, numbing and lulling you into a pleasantly somnambulant state where all you want to do is sit by the fire and read. Ack!!!

At first, I tried to fight off the vapors by going hiking and adventuring around the area with my sister, who’s been living in my mom’s guest cabin until she figures out what she wants to do. But she was also dog sitting for her soon-to-be ex-husband while he travels to Israel, and for whatever reason they don’t allow dogs in many of the area parks, so we couldn’t go many places. BOOOOO! 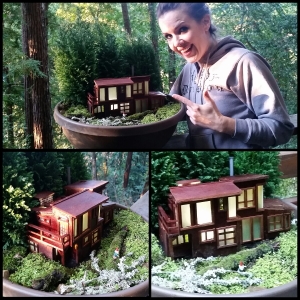 a labor of love

Oh, well — since I was basically trapped in a cabin in the woods with nothing to do, I finally had the time to finish this present I’d been trying to make my mom for awhile now: a miniature replica of her cabin, that she could keep out in her garden like one of those kitschy garden gnome cottages. My mom has wanted to live in a cabin in the forest her entire life, and now that she finally realized her dream, I wanted her to have a memento of it in case she gets tired of the vapors and ends up moving. 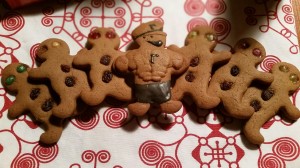 I got the idea back when I worked that home & garden show in April or whenever it was — it took me that long to get it together! But I finally went to Michaels and got some balsa wood, craft glue and shellac, and spent many rainy/misty afternoons working on it in my sister’s cabin down the hill. It actually came out pretty good, and my mom loved it 🙂

Anyway, the rain and mist finally broke in time for Christmas, so we were able to have a pretty good time and even have a bonfire/picnic on the beach the day after the holiday. But despite my best efforts, I was never able to round up anything exciting to do on New Year’s Eve — I personally despise NYE and always have, but every year there’s this stupid pressure to come up with something amazing to do. In the past, I’ve usually worked one job or another…but this year I was off, so I thought I might be able to scare up some kinda crazy midwinter adventure involving mushrooms, astronauts, a hot spring, a dry lake bed or some monkeys and elephants or something. Alas, no dice — the only stuff I found was the usual dumb ass parties and nightclub b.s.

my rib at the moment of cracking

So I ended up just heading back to Vegas, where at least I might be able to find a gig and make some coin off other peoples’ sentimentality. On the way back, I decided to attempt a three day fast — I’d read somewhere that doing so resets your immune system, with the bonus side effect of shedding unwanted Christmas cookie flab. I ended up only making it 37 hours, though 🙁 But on the plus side, I did manage to finally get back to the gym and lift weights — I’d been holding off since I cracked my rib wrestling (see above….shudder), but I got checked out by the doctor and she gave me the go-ahead (and confirmed that my rib did indeed appear to be cracked. NO MORE WRESTLING!!!).

So anyhoo, back in Vegas I hit up Facebook and Craigslist, looking for a New Year’s Eve gig. It’s pretty easy to find decent-paying work on NYE here in Vegas, since so many assholes bring their cash to town and the casinos roll it all out for their biggest gamblers with lavish, excessive parties, and I ended up getting a gig spinning cotton candy at one such party, at a very upscale hotel.

In fact, I’m actually writing this on my break at that gig — I had to come down here early in the afternoon to practice spinning cotton candy, but then they gave us a 4-hour break before the party actually starts, and traffic is such a clusterfuck that it’s easier to just stay here at the hotel. So far, though, the gig has been amazing! I have long been obsessed with cotton candy; back in the day, my friend Turquoise had a cotton candy machine that he borrowed from a dentist, who had gotten it as payment for some dental work he did for a broke carny. Turquoise and I ended up hosting this fabulous cotton candy party where everyone dressed all in pink, and we picked the guests up at a local park, blindfolding them and loading them into a van so they wouldn’t know where we were taking them. The party location was actually the local Mormon church (Turquoise and the owner of the cotton candy machine were in the same Mormon ward), and the party was a real rager until the bishop of the church showed up and busted it, kicking us out 🙁 But what a great memory!!

Aaaaaaanyhoo, now I’m sitting here in a back hallway of a douchey Vegas casino, reflecting on the sad fact that for once in my life, I FAILED at scoring an adventure. How is this even possible?!?! Adventure usually finds me!! So while I’m sitting here stewing, I decided to look back at 2014, and come up with a shortlist of the most amazing adventures in a year filled with amazing adventure! It was tough to whittle it down to just 10, in fact…I had leave a bunch of stuff out. 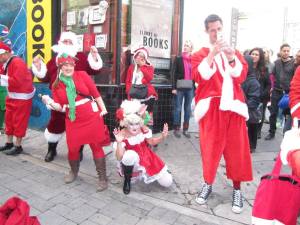 I know it just happened the other week, but I’m telling you… that was one of the most amazing parties I’ve ever been to!!! I won’t dwell on it though, since I just wrote about it not long ago. Good times! 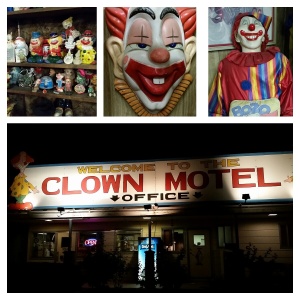 Back in September I took a mini road trip into the darkest depths of central Nevada with my grouchy lady friend Ninotchka. We visited the World’s Meanest Bartender in Goldfield, stopped in at an abandoned brothel near Lida, and then spent the night HERE, at this fabulously creepy place in Tonopah!

Read more about it here. 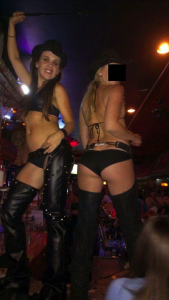 8. Slumming with Bullet and Blondie at the Reno Bike Rally!

My friend Blondie invited me up to Reno to work this bikini bike wash with her and another chick, who turned out to be a midget redneck stripper who’d fallen on her head at the club one night, turning her into a raging bipolar maniac with a severe drinking problem, an openly carried (and fully loaded) pistol on the hip of her Daisy Dukes, and a propensity for “ruckussin’.” The bike wash ended up getting rained out…but Blondie and I figured out a way to rake it in anyway, dancing on this bar in downtown Reno…so it was all OK. 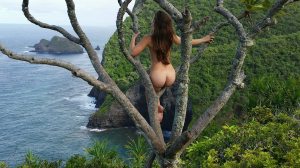 Hiking in Pololu Valley, on the Kona coast

The triathlon itself was bizarrely entertaining, but the rest of my time in Hawaii as the guest of Dr. Who was equally amazing!! Hiking, snorkeling, hobnobbing with elite sports-medicine doctors and their wives, carrying vomiting Frenchmen around on stretchers…surreal! 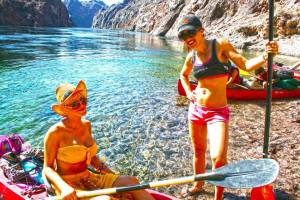 The Empress and I!

6. Kayaking with the Empress!!

The last person on earth I would have expected to join my hippie friends and I on a shroomy excursion down the Colorado River was The Baroness — a legendary busty, boozy party girl who usually never even gets up before noon, let alone kayak down a river while sanitizing a busted toe with Old Crow whiskey. That bitch is truly badass! We camped out on the beach by the Arizona Hot Springs, scarred a troop of Boy Scouts for life, and washed it all down with Crowconut lattes. One of the best adventures of the year, for SURE!!! Read more here.

Back in June, this traveling musician who read my blog invited me to meet up with him at some hot springs in the desert. He turned out to be cool and very handsome, and relentlessly campaigned to get in my pants (which is why I insisted on sleeping outside his van, as in the photo). I resisted him awhile, then finally caved — and then he blew me off anyway, informing me that his “open relationship” was really a serious relationship. Lesson learned….Hmmmph!  Read more here and here. 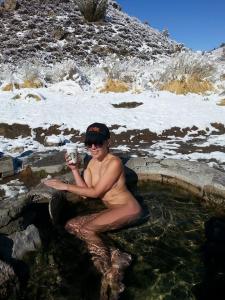 4. Freezing my balls off with my frenemy, Alex!

Earlier in the year, I met a fellow adventurer named Alex who shares my love of mushrooms, the desert and hot springs. We went on a few adventures together, but since he was a terrible alcoholic at the time, they always turned into us getting into some kind of crazy horrible fight — as when he tricked me into camping out at Mammoth Lakes, in the snow!!! I almost froze my balls off, but it was worth it — soaking in a hot spring as snowflakes fall all around you is amazing! Just remember to keep your hat on, or you’ll have to sleep with freezing, wet hair 🙁 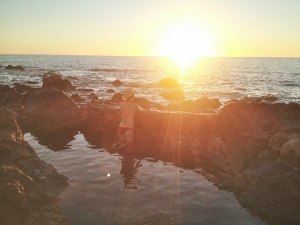 3. Burying my drugs in the desert while I visit Mexico!!

In the midst of my Jack Johnson debacle, I arranged to meet up with my sis down in Baja California, where we visited these amazing coastal hot springs in Puertocitos. But before crossing the border, I buried a little stash of weed and shrooms in Brawley, CA so that we could pick them up on our way back into the U.S., for the next stop on our trip, at Deep Creek Hot Springs. Read more here.

the disco ball
by jonathan

2. The Dong and the Disco Ball! 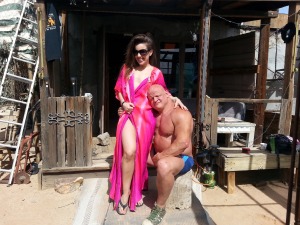 Back in March, I went out to Wonder Valley, CA to party with some German artist friends at their crazy desert compound…and there I met this amazing electro-pogo singer named Kapt’n Rummelsnuff! I caught his show at the local dive bar, and then my sis and I helped him make his new music video, in which we feature as interpretive dancers. FAR OUT!!! Read more here.

So anyway, it’s gonna be pretty fuckin’ tough for 2015 to live up to all that………but you can count on one thing: I’M GONNA TRY MY DAMNDEST!!!!

See you next year 🙂