Posted on October 1, 2015 by wonderhussy 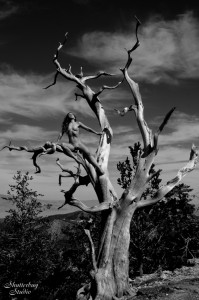 As the #1 Google result for “Las Vegas nude model,” I do a TON of outdoor photo shoots in the desert around Vegas. I have a few locations that I use for this — dry lake bed, abandoned buildings, fabulous red sandstone formations — but I am always on the lookout for new spots to shoot at. And the other day, I found a humdinger: the ancient bristlecone pine forest up in the Spring Mountains, just northwest of town.

Bristlecone pines are the longest-lived life forms on Earth — over 5,000 years old in at least one case — and over the millennia the winds have blasted them into gnarled, twisted shapes. The dead ones are the most visually striking, as they have lost all their bark and have these beautiful, whorled striations on their trunks and branches. The trunks are almost the same color as my skin in some cases – although they photograph most dramatically in black-and-white. 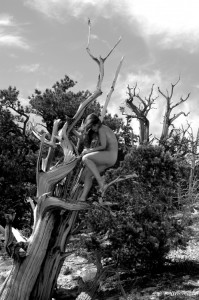 These amazing ancients are found only in Nevada, Utah and eastern California (other less long-lived species are found in Colorado, New Mexico and Arizona) and I first discovered them several years ago, while hiking to the Raintree. The Raintree is this massive bristlecone pine in the Spring Mountains up near Fletcher Peak that is said to be 3,000 years old — making it (allegedly) the oldest living thing in Nevada…now that Joan Rivers is gone (ZING).

Anyway, the Raintree hike is one of my favorites in the Vegas area — after going about a mile and a half through a Ponderosa pine forest, you reach this amazing barren plateau overlooking all of the Las Vegas Valley and the surrounding desert; you can even see the Strip in the distance! It’s a huge flat area, and someone even built a little shanty out of fallen branches at the base of one of the bigger bristlecones. It would be an amazing place to camp out and have a drum circle or something like that! 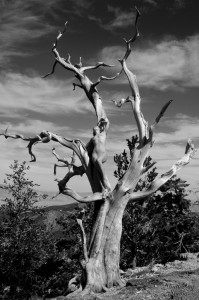 But what’s really striking about this plateau are all the gnarly, dead bristlecones up there. Because it’s a windblasted ridge, they have taken on some really cool, twisted shapes…and I always thought they would make for some amazing art nudes. IF I could ever convince a photographer to hike up there.

Alas, however, I probably won’t be bringing (m)any photographers to this location. Although the trailhead is less than an hour from the Vegas Strip…the hike to the plateau itself is about 1.4 miles uphill with 1,000 feet of elevation gain, starting at 8,439 feet and ending up at 9,331 feet. And that’s just to the plateau — if you want to go all the way to the Raintree, it’s another 1.3 miles and 700 feet of elevation gain. The trail itself is technically fairly easy (I do it in flip-flops)…but it’s relentlessly uphill. You’ll have glutes of steel by the time you’re finished — did I mention I can crack a walnut in my ass?! 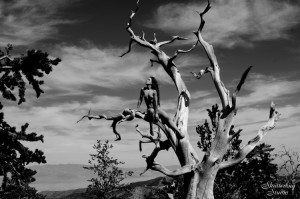 Anyway, most of the photographers who hire me aren’t up to the challenge…but I did convince my friend Randy Fosth a/k/a Shutterbug Studio to come with me the other day. And though he almost died doing it, we got all the fantastic photos you see in this blog…so I guess it was worth it!

Anyway, if you’re an adventurous sort, in moderately decent shape, and want to hire me for a shoot up here, I’ll be glad to 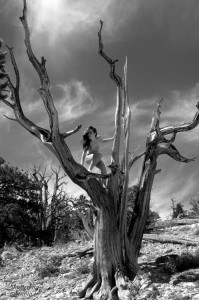 take you up on it. All you need is water and a camera — I’ll take care of the rest! As an added bonus, because the elevation is so high, you can shoot here even on the hottest day of summer — it might be 100 degrees down in Vegas, but up here it’s generally at least 20 degrees cooler.

But even if your physical limitations won’t allow for this hike, don’t worry: all my other locations are very easy to drive to, with minimal walking/hiking 🙂 We can still take beautiful photos…I got your back!

*Hike information taken from Jim Boone’s fantastic site birdandhike.com. Directions to trailhead can be found there as well…or see my video below: