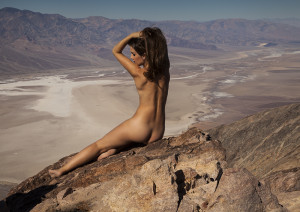 One of the remotest, harshest, most extreme landscapes on Earth, Death Valley is very popular with adventurers and photographers alike. As an adventure spot, it’s amazing — you’ll never run out of cool shit to explore. And even though it’s a super-popular tourist destination, it’s also surprisingly legit for shooting art nudes!

Weirdly, the busiest (i.e. most crowded) season for visiting Death Valley is the heat of summer — when temperatures often reach into the 120s. So it’s best if you can visit in fall or winter, when it’s less crowded with Germans (who love the desert…along with other Europeans, Chinese and Japanese). 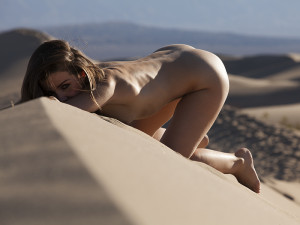 As far as nude photography goes, one of my favorite spots in Death Valley is the Mesquite Sand Dunes, right outside the “town” of Stovepipe Wells (I use quotation marks, because it’s not really a town…just a motel/restaurant and a gas station/convenience store, along with a nearby campground — and no cell service). These dunes are low, rolling, and fairly vast…and make a great place to shoot at sunrise/sunset. You can follow a paved road right up to the edge of the dunes, then hike back into them far enough that no one will bother you…although a photographer friend was once bitten by a sidewinder out here, so be careful! 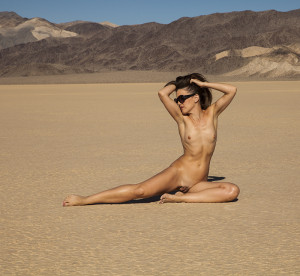 Another amazing place to shoot nudes (or just to explore) is the Racetrack Playa. You’ve probably seen photos of this mysterious dry lakebed — upon which large stones appear to move on their own, leaving long tracks carved into the surface of the playa. Scientists recently cracked the mystery of how these giant rocks move on their own (it has to do with ice and wind)…but it’s still a weirdly magical, mystical place. And because it’s so remote, it’s beyond question the most pristine dry lakebed surface I’ve ever seen. Although I read that some British jackwads recently went in and carved their names into the surface….BAD FORM 🙁 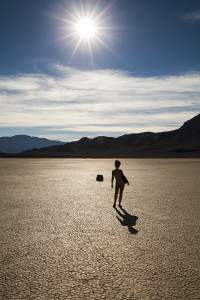 The road to the Racetrack playa is long (26 miles) and rough, and high clearance/4WD is recommended. I did it in my 2WD Ford Ranger, by driving very slowly and cautiously…but you really do have to be super careful — a photographer acquaintance (the same guy who was bit by the sidewin

der at the Mesquite Dunes, LOL) broke his steering pin out there, and had to roam around the lakebed in the blazing sun until he found a tiny sliver of cell service, and then had to pay Farrabee’s  something like $900 to tow him back out to Furnace Creek — where he then had to figure out a way to get the parts out from Vegas!!! Talk about a nightmare :-/

But if you’re patient and drive carefully, you will be rewarded with one of the most amazing sites on the face of the Earth. It’s truly magical out there! I shot out here once, and it was absolutely incredible. We did not spend the night, but I saw that there were camp areas nearby — you’re not supposed to camp on the playa itself, but it would be an amazing place to just lay out and look up at the stars. (There’s zero vegetation, and thus no bugs, on this playa…perfect place to sleep, if only it were permitted.)

Along the way to the Racetrack, you also pass a place called Teakettle Junction — a lonely crossroads (of two super-shitty dirt roads) marked with nothing but a signpost that used to have dozens of teakettles dangling from it (they might still be there; I thought I read somewhere that the gov’mint removed them). If you take the turnoff here, you can eventually wind around and end up at Saline Valley Hot Springs — but ONLY if you have an EXXXTREMELY burly off-road vehicle!! (That road is H A R D  C O R E !) Otherwise, just check out the teakettles and then keep going to/from the Racetrack.

Another popular tourist site in Death Valley is the Badwater Basin — a/k/a the Lowest Point In The Western Hemisphere™ (282 feet below sea level). It’s a vast, flat, cracked, shining white salt surface that is truly otherworldly in its weird, blinding beauty…but it’s not a very good spot for shooting nudes, as it’s possibly THE top tourist spot in DV and is almost always crowded with tourists. You’d have to walk WAY out onto the salt flat to get privacy….and since it’s usually HOTTER THAN SATAN’S BALLS out there, it’s not really worth it. 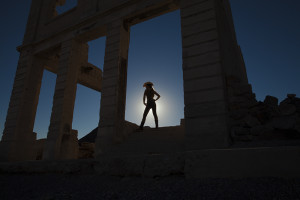 Other popular tourist sites in DV include Devil’s Golf Course (a craggy sort of crusty salt playa), Zabriskie Point (yellowish stone sand-duney-type formations) and Scotty’s Castle (a 1930s-vintage adobe McMansion built by some old-time con artist)…but all of these are on the standard Death Valley tour itinerary, and usually choked with idiots — thus unsuited to nude photography or extreme adventuring. Same with Rhyolite, a ghost town just outside the boundaries of Death Valley that is inconceivably popular with photographers — inconceivable to me, as it is always so crowded with tourists that it’s nigh on impossible to have a private moment…although I did shoot some nudes here once, with great pains. (For better ghost town options, click here.) 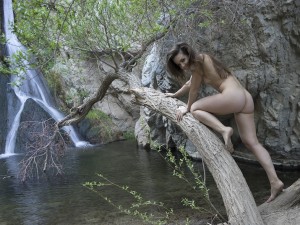 A better option that is more or less off the beaten path is Darwin Falls — a hidden oasis near Panamint Springs. A short, easy hike leads to these amazing, secret waterfalls in the middle of the hottest, most barren desert this side of Sudan — and they are truly magical! Even in the hottest months of summer, this hidden oasis will cool you down; there are two waterfalls — the lower one feeds a beautiful little tree-shaded pond, and the upper one (a bit tougher of a hike to reach) cascades dramatically down a barren cliff face. The lower falls are definitely more popular with hikers/tourists, but if you wait it out, you can get a private moment and shoot a few nudies, if so inclined :-0 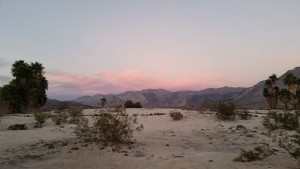 But if you really want to get off the beaten path, check out Saline Valley Hot Springs. I’ve written about these springs at length, so I won’t say too much here — check out this link if interested. Suffice it to say, these springs are a true hidden gem of an oasis in the middle of THE MOST BARREN VALLEY ON EARTH (OK, maybe there are more barren valleys…but I’ve never seen one) — but it’s a REAL HARDCORE TASK to get there. Sorry for all the caps, but I cannot emphasize enough how FUCKING HARDCORE it is to get here — the roads can be terrible, and without adequate preparation YOU WILL DIE trying to reach them. No exaggeration!! There’s no cell service, no water, very little traffic and extreme temperatures — plus a SUPER rugged road which will break your oilpan, axles and tires if you let it. BEWARE! 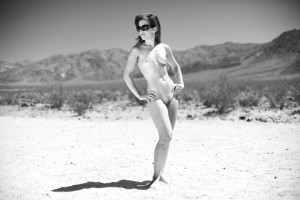 If you do make it to Saline Hot Springs, it’s more of a relaxation destination than a shooting location — just a bunch of amazing hot spring pools, palm trees and leathery naked hippies who don’t take kindly to cameras. Although I was out there once, just minding my own business, standing around naked by one of the pools one afternoon…when a 4X4 Jeep loaded with photo gear came bumbling down the mountain, and a photographer stepped out proffering a business card, tentatively asking if he could take my photo. (OF course I said yes — even though I wasn’t wearing any makeup; it turned out he was shooting infrared anyway, which penetrates below the surface and makes the whole issue irrelevant.)

ANYWAY, aside from all that there are plenty more places to explore in Death Valley — but I haven’t been to them yet, so can’t speak to their photogenesis or interest factor. One place I really want to check out is the Barker Ranch — a/k/a the last hideout of Charles Manson and his kooky Family!! There are supposedly still building foundations and rusted cars left over from Manson’s stay, and who knows what kind of crazy artifacts they left behind!! OMG, if anyone reading this has a 4WD Jeep and the ability/interest to go there with me and check it out, LET ME KNOW!!! I’ve been dying to explore that place for years, but haven’t yet found the man or woman with balls enough to do so. Hit me up!

Now, as far as places to stay in Death Valley: it’s over 2 hours from Vegas, and 90 minutes from Pahrump…so commuting from hotels in either of those cities is kind of a pain. If you’re just off adventuring/exploring, there are tons of campgrounds and BLM areas in and around Death Valley to just pitch a tent/car camp at, under the most amazing sea of stars you’ve likely ever seen — it’s fantastic!!! But if you’re trying to bring a model out here for a photoshoot…then you probably want to stay in a hotel 🙂 Here is my hotel advice: 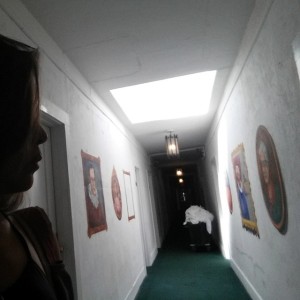 If you’re a baller/classy guy, you can get a room/rooms at the Furnace Creek Inn — a luxury resort right in the middle of DV, but it’s NOT cheap! If you’re on a budget but want to seem cool, you can instead stay at the Amargosa Opera House — a truly bad-ass old motel on the edge of Death Valley near Pahrump that is supposedly haunted. It’s owned by a 90-year old ballerina from New York who fell in love with the desert and retired out there, still performing occasionally in a kooky Opera House she built adjacent to the motel. She even painted murals featuring fake audiences on the walls, so that she’d never have to perform to an empty house. LOL!!!

The motel itself is very atmospheric — the halls are spooky and flooded with diffused natural light coming thru skylights, and the grounds are cluttered with rusty old bric-a-brac and other desert effluvia. You could potentially shoot nudes here on the downlow, but you’d have to be very discreet, as there are usually other guests staying here. As far as facilities go, there’s no pool or anything like that, but they do have air conditioning and showers…though the hot water is spotty at best, and can’t be counted on. I’ve stayed here a couple times, and I LOVE it — but it ain’t the Ritz. Plus, it’s kind of far from most Death Valley locations discussed in this blog…so if your model is a diva, beware!!!

More practical is the motel in Stovepipe Wells — conveniently located right across the street from the Mesquite Dunes, so perfect for a sunrise shoot. These rooms are very modest and utilitarian, along the lines of a Motel 6…but nowhere near as funky/charming as the Amargosa Opera House. On the plus side, the hot water is reliable — and there’s a bar and restaurant onsite, plus a gas station/convenience store nearby. 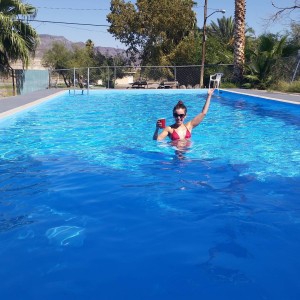 One other option is to stay outside the park in either Shoshone or Tecopa, two tiny outposts on the CA/NV state line just outside DV Nat’l Park. Because they’re farther away, rates are lower — but these towns are pretty freaking charming on their own! The Inn in Shoshone has a swimming pool fed by a natural warm spring, which is really nice on those hot summer afternoons, and there’s a bar/restaurant in town serving decent quality hot food. 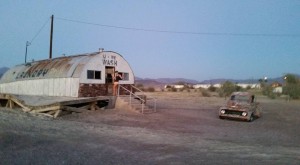 hot springs source, with several bathhouses in town to choose from if you want to soak in the wintertime. There’s even an all-natural mudhole spring you can soak in under the stars, just outside town — it’s one of my favorite places! As of my writing this there is also one AMAZING place to eat in Tecopa, the Death Valley Internet Cafe — a true foodie heaven featuring fresh, foodie-type food cooked to order by guys from Vegas who moved out here to do this as a passion; it’s one of my all-time favorite places to eat, EVER! Fore more info on Tecopa, click here.

Anyway, that’s all my info on shooting in and around Death Valley. I personally love it, and if you want to shoot there…let me know! 🙂

18 Responses to Shooting In Death Valley