There are four major sand dune fields near-ish Vegas: Dumont, Big Dune, Kelso and Mesquite (in Death Valley). All are about a 2-hour drive from the Strip. 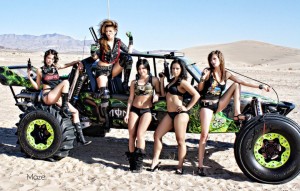 Dumont Dunes is a huge field of dunes down near Baker, CA….but there is a substantial ($30+) charge to enter, and the place is usually full of rednecks razzing around on dune buggies, sand rails, quads, ATVs, dirt bikes, and whatever other gas-guzzlin’, noise-makin’ apparatus they can get their hands on. On holiday weekends (especially Thanksgiving), this place attracts as many as 10,000 rednecks, all of whom camp out on the valley floor in RVs and toy-haulers, drinkin’ beer and praisin’ Jesus til all hours of the morning. 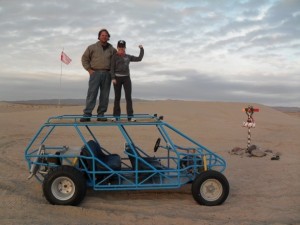 I came here once with an ex-boyfriend, just to hike/scope it out…and a genial redneck in a 4-seater sand rail raced up to us immediately: “Are y’all here for the commercial??” Apparently, AT & T was planning to film a commercial out there, complete with a giraffe, and had sent some scouts out earlier in the week — none of which we knew anything about, obviously. But this super-friendly guy offered to take us on a tour anyway, and hurtled us all over the dunes — up, down, and all around….even to the farthest northern reaches, where the redneck folk have erected a red-and-white-striped “North Pole” complete with a mailbox stuffed with letters to Santa (“Deere Santa, pleaze bring me a 12 pak of Coors Light and a jumbo-size tin of Copenhagen”). AMAZING! 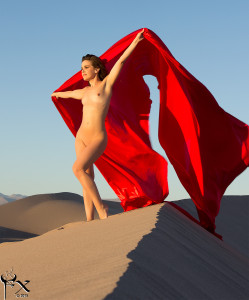 Big Dune is about 2 hours north, near Amargosa Valley, NV. These dunes are also open to vehicle (a/k/a redneck) traffic, and are thus not ideal to shoot at, either…though there is no entrance fee, so I prefer them to Dumont. At least you can cruise out to check them out for free! You can even camp overnight here for free, if you want. (On my bucketlist — hit me up if you want to do it!)

The road from U.S. 95 is dirt, but fairly well maintained, and can be driven by just about any vehicle — no 4WD or high-clearance necessary. Of course, if you want to drive up into the dune field you’ll need 4WD — otherwise, park your car at the camp area, and hike in.

I shot here twice, and both times there were rednecks razzing around the fringes…but as long as you ignore them, they won’t hurt you. One time, however, there was a troop of Boy Scouts camped out…and when he saw me, the scoutmaster was very nervous. He approached the photographer I was with, and asked him not to shoot “her” (he addressed me in the third person, as if I were chattel) near the boys. 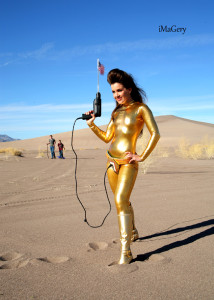 I found this mildly offensive, but we complied anyway and hiked up pretty far into the dunes, away from the pristine eyeballs of the adolescent Boy Scouts, so as not to offend their delicate sensibilities. BUT, wouldn’t you know….a couple of those sneaky little fuckers crept up on us anyway, and earned their Merit Badge in Perving.

The most ironic part of all was, the Scoutmaster had set up this camping trip to be like a mini Burning Man; he had even erected a wooden Scoutmaster effigy, to be burned at the end of the trip à la Burning Man. Well, I have news for you, buckaroos — there are TONS of naked women at Burning Man. So get used to it!! The more you become accustomed to seeing vaginae and bare breasts, the easier your lives will be. It’s just skin!!! 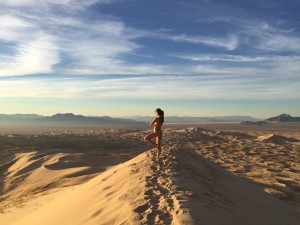 Anyway, the third set of dunes is by far the best for shooting nudes — Kelso, in the Mojave National Preserve, 2 hours south of Vegas. There is no charge to enter these dunes, and they are closed to vehicle traffic, so they’re almost always deserted — no rednecks allowed!! You can also camp out here for free, though no one seems to ever do so — which is a shame, since it’s an amazing campsite (no facilities, but amazing nonetheless).

Kelso Dunes also have the distinction of being one of only 30 or so dunes in the entire world that make an eerie “booming” sound when you slide down them. Also known as “singing sands,” these dunes are composed of a certain size grain of sand, which in conjunction with a particular rate of humidity produces a low-frequency didgeridoo-type sound when disturbed or moved (as when sliding down them on your ass). 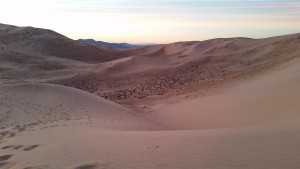 To be fair, both Big Dune and Dumont Dunes are also technically singing sand dunes…but the noise of all the sand rails and ATVs drowns out the delicate sound of the singing sands. So Kelso is the only place you can really hear it.

The fourth dune field near(ish) Vegas is the Mesquite Dunes, near Stovepipe Wells in Death Valley National Park. These dunes are lower and more rolling, and also closed to vehicle traffic…but because they’re in Death Valley, there are usually hikers and Looky-Lous around, making nude photography a bit more difficult (though not impossible, by any means!). Also, there is $20 fee to enter Death Valley. 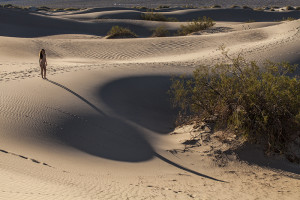 A photographer acquaintance of mine was bit by a sidewinder in these dunes, so be advised — there is no cell service in Death Valley, so he endured a LONG ride back to the nearest hospital in Vegas to get treatment! But if you want to check them out, your best lodging options are either the adjacent campground, the motel in Stovepipe Wells (adequate), or a commute from Pahrump/Vegas/Death Valley Junction.

9 Responses to Sand Dunes Around Vegas