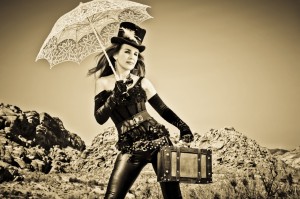 Finally, a week without anything shitty to gripe about! IT’S ABOUT FUCKIN’ TIME!

It all started last Friday, when I volunteered for this Blood Wrestling event some local wackos had cooked up over at the Sci-Fi Center, a grungy little comic book shop over in the fabulous Commercial Center.

You may remember my mentioning the Commercial Center in past blogs — it’s a derelict old strip mall that was the swankiest place in town back around 1970, but is now a bombed-out wasteland of asphalt and empty storefronts, peppered with a few stubbornly surviving establishments. Since only the hardiest, most recession-proof businesses survived the decline and fall of the Commercial Center, it’s mostly wig shops, gay bars, sex clubs and gay bathhouses. In other words…better than Disneyland! 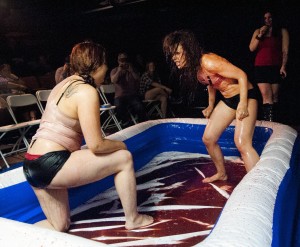 Truth be told, I’m getting a little tired of my beloved Downtown Vegas — it’s too hard to park, and there’s too many hipsters. (Check out this article I just wrote for one of the local papers on that very subject.) So I was more than happy to volunteer to blood wrestle at the Sci Fi Center, since it meant a fabulous Friday night at the Commercial Center, instead!

The wrestling match was the brainchild of the Vamp Girls — a couple of gore-core fangirls who stage all kinds of weird events around town. The Blood Wrestling match was part of a cannibal movie night they were hosting in the back room of the Sci-Fi Center, which has been converted to a little theater. The seats were packed with bearded, bespectacled sci-fi/gore/vagina aficionados training their iPhones at the inflatable kiddie pool filled with a mixture of chocolate syrup, cranberry juice and corn syrup in the front of the room, where me and 5 other chicks were to duke it out for the prize — a PHOTO SHOOT! 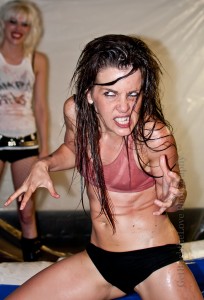 Now, I need another photo shoot like a fish needs a bicycle, but it wasn’t even about the prize — it was about WINNING! I am very competitive when it comes to stupid stuff like this, so I was determined to win. I spent a good half-hour making a robe to wear into the ring — I took an old pink bathrobe and put a big, silver “W” for the back…and then I filled the pockets with wonderhussy.com stickers, which I threw out into the audience upon my entrance. I made a big fuckin’ production out of my entrance, because to me, that’s what rasslin’ is all about: the histrionics!

Alas, my opponents were all much younger and spryer than I, so I had to pull out a secret weapon: my scream. For those who haven’t heard me scream, I do this weird, primitive kind of primal shriek/scream thing that is UNBELIEVABLY loud and hair-raising (see video below)…and I used it to my advantage in the ring, successfully freaking out my competition enough to win the entire match!

Never mind that I was sore for 3 days afterward, and covered in NASTY bruises…I won! I celebrated my victory by going home and showering off all the Karo/cran/choco, then changing into my Wonder Woman costume and heading back to the Commercial Center to check out the Balloon Master Show, a sort of monthly adult variety show held in this janky little theatre down there. After the show, I drank the night away with a friend at the venerable Badlands saloon — a western-themed gay bar that also serves as a drinking spot for nervous swingers (it’s neighbored by swingers’ clubs on both sides, neither of which are permitted to serve alkyhol). 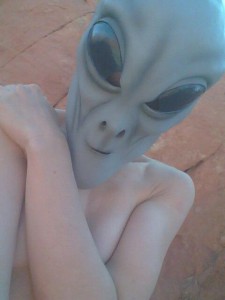 Now as mentioned, the wrestling match left me sore and badly bruised…which was a real bitch, considering I had a nude photo shoot lined up, and I hate using body makeup!! Fortunately, the bruises had mostly faded by the day of the shoot, and besides, the photographer turned out to be cool as hell…so even if he noticed, he didn’t say anything. He was more interested in getting me to wear this creepy alien mask for some of the shots — FUN!

The only bummer about our shoot was, he wanted to shoot out at Valley of Fire, a *B*E*A*U*T*I*F*U*L* state park about an hour north of here featuring the most dramatic, red rock cliffs and caves you’ve ever seen. I love V of F, but it can be tricky to shoot there because the park ranger is a real hardass and won’t allow any “professional” shooting out there without a permit — and NEVER any nudes. Still, I’ve shot out there a handful of times without incident — ya just gotta keep a low profile, and hike back off into the backcountry before shooting anything.

Even then, though, I’ve had problems! One time, me and this Spanish photographer drove out with another model, and we hiked waaaay back into a slot canyon to shoot some nudes. Somehow, the ranger sniffed us out — he actually hiked 1/4 mile down this slot canyon to find us, and proceeded to lecture the photographer and the other model: “Young lady, put your clothes on! Sir, come with me! You can’t shoot these kinds of pictures here. What would happen if a couple of cowboys came along, put a bullet in YOUR head [the photographer] and then had his way with you [the other model]?!”

I thought he was being a WEE bit melodramatic, but at the time I was hidden out of sight behind a boulder, and I decided to stay hidden in case he the fine for two vaginas was higher than the fine for just one. I scrambled along in the brush, naked as a jaybird, about 50 feet behind the ranger as he marched my friends back to the car. Then I squatted behind a bush like a deranged naked Manson family member until the ranger FINALLY finished reading them the riot act and let them go. But it wasn’t over yet! Thinking that canny bastard was probably parked somewhere waiting for us to leave, I had to sit bent over the entire way out of the park, so he wouldn’t see me through the windows of my truck. FUCKER! 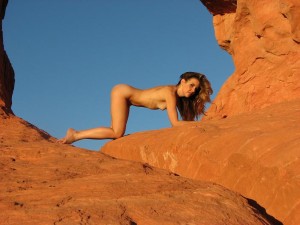 Aaaaanyhoo, that was a year ago, but I’m still a bit apprehensive about shooting out there — especially when I know of similar, less-troubled areas to shoot. But this particular photographer was really set on V of F, so I agreed to go out and try it anyway. Sure as sugar, that motherfuckin’ ranger followed me from the minute I went through

the gates! I drove verrrrrrrrry carefully, adhering to the speed limit and whistling nonchalantly, but that fucker followed me across the entire park. Finally, I turned off at an overlook, and he kept going…but it was a close call, and very reminiscent of the coyote and the roadrunner from the cartoons! Try and catch me, sucka…meep meep!

I left Valley of Fire and headed back into town for a total waste of time — a/k/a this casting call for Playboy TV they were doing at Planet Hollywood. I know I’m not the Playboy type, but this wasn’t for Playboy-Playboy, it was for Playboy TV…which as we all know has looser standards. I think they were just looking for naked chicks to be in the background of stuff, so I figured why the hell not. The casting agent kept emailing me, so I finally buckled and went over with about 100 other sad hopefuls with bad extensions and muffin tops wedged into cheap corsets. It’s a sad fuckin’ commentary on the state of our shitty society that the epitome of success for most American chicks is to be a fat-assed geriatric-dick-sucker in a bunny costume. I guarantee you, if they had a casting call for social workers or Peace Corps volunteers…none of ’em would have showed up.

Moreover, one of the requirements for this audition was nudity (HELLO!!!), but you’d be surprised how stupid chicks can be…one girl sat in there wishy-washying with the poor P.A. in charge of the audition: “Can I just put a question mark? I’m not sure I feel comfortable being nude on camera.” LOL! Dumbass. You’d suck Hugh Hefner’s balls in a hot minute, and you’re waffling about flopping your tits out in a conference room? Meanwhile, I went in, dropped trou like it was nothing, and was on my way in 60 seconds. Might as well waste as little time as possible, ya know? 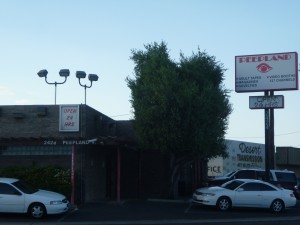 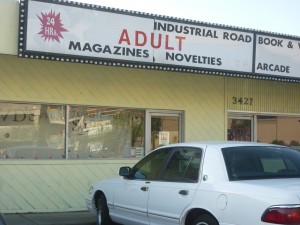 Besides all the mainstream Adult stores, which are like Wal-Mart…there are a bunch of really seedy, nasty little joints tucked away in the various crevices of Vegas. Concrete floors, hand-lettered signs warning against jerking off in public, walls of shame with photos of the unfortunate pervs who were busted in flagrante delicto… it was a real anthropological adventure. The worst was probably Adult World, a pink warehouse in a run-down, working class part of town populated mostly by illegal immigrants (indeed, I saw a pocket pussy marketed toward Hispanics, a/k/a un bolsillo de panochita)…but a close second was the Adult Mega Outlet, out by the Air Force base, which was depressingly neat and tidy in a “bounce a quarter off your jizz stain” kind of way. Just thinking about those poor Iran-bound fools jerking off to videos of cum-guzzling high school dropouts was enough to cause my chronic Weltschmerz to flare up again. This is what you’re fighting for, boys…God, apple pie, and cum-guzzlers. Git ‘er done! 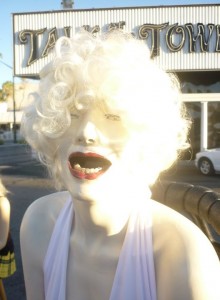 The manager was extremely friendly toward me, and offered me a job dancing in the peepshow. He really worked me over, selling me on the fact that unlike strip clubs, at the peepshow you don’t even have to get a Sheriff’s card to work (because there is no contact with the patrons…why that makes any difference to the Sheriff, I have no idea). Why, just last week a couple of broke co-eds from Denver came in and asked to work — they had lost all their money gambling downtown, and needed money to get home! After just a few days of dancing in the peepshow, they had earned bus fare back to Colorado. BUS fare! This tells me one of two things: either bus fare is more expensive than I thought…or there ain’t much money dancing at Showgirl Video’s peepshow. I’m inclined to bank on the latter!

The manager either didn’t notice or chose to ignore my skeptical expression, and gave me a “backstage” tour (!!!!!) of the peepshow area… which was fascinatingly depressing. On my way out, a big fat slob of a customer in a stained polo shirt reassured me: “Don’t be shy, honey; you’ll do fine!” Uhhhh, yeah! Next time I need to earn bus fare to anywhere, I’ll let ya know, boys… 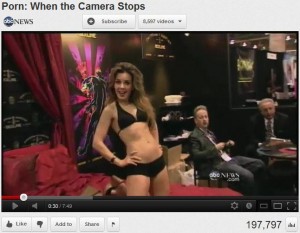 After all that gnarliness, it was nice to take a night off and relax with my fellow Vegas artsy types at the monthly First Friday arts festival. This month was nowhere near as cool as last month’s, and there were far too many kiddies around for my taste — it looked more like a fuckin’ church picnic than a counterculture festival. I mean, they had a bouncy castle! Thankfully, I had a bottle of champagne in my purse, so it didn’t bother me tooooo badly. I met up with two guys I barely know, and ended up having a fine old time hanging out boozing and eating late-nite nastiness at the Gold Spike with them, before adjourning to the lounge to watch a 3-piece classic rock cover band. My last memory was singing “Hotel California” with a biker who looked like Willie Nelson, before my guy friends finally dragged me away back to my car. Gooooooooooooood times!