No wonder my neighbors think I’m a godless shiksa…

Last month I answered an ad on craigslist placed by a Canadian photojournalist looking for local gun owners to photograph.

I’m not a gun nut, but I do own a 9mm Sig for personal protection. (In case you’re wondering, I named it Rutger Hauer, der Sig Sauer. It has come in handy over the years, like the time some pervert broke into my apartment here in Vegas and stole all my underwear. No kidding.) 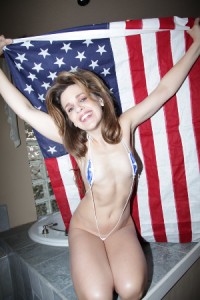 The photojournalist was the fabulous and inimitable Ben Philippi (www.benphilippi.com), and he came over to my house for the shoot. He brought with him a bag full of red-white-n-blue stripperwear, including this micro-monokini. This thing was so tiny as to be useless, but with the help of some clothing tape and a few whacks with the razor, I was good to go.

Interestingly, my gun isn’t even in any of these photos. Hmmmm…

Anyhoo, Ben is a super cool guy and he got a lot of amazing photos of me. We shot some stuff in my bedroom, but then he had me go outside into this empty lot next to my house, where I frolicked about in my micromonokini, waving the stars & stripes for all to see.

I didn’t really give a shit what my neighbors thought — I live in a weird, old-school neighborhood with no HOA (thank dog); one of those neighborhoods where people have old school buses, tanning beds and swimming pools in their front yards (yes, one of my neighbors’ pool — which is empty — is in the FRONT yard, in plain view of the street. And another neighbor has a tanning bed on his front porch. That kinda kookiness would never fly in Summerlin!). 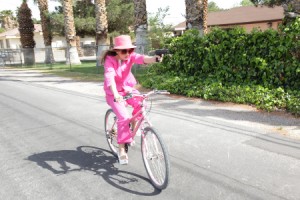 But there is also a sizeable population of Hasidic Jews who live in my ‘hood. Even in the thick of the miserable, brain-searing Vegas summer heat, you’ll see them walking to temple on Shabbat, in full Hasidic dress — black wool hat, black wool overcoat, black wool underwear (for all I know). That’s hardcore!

They’re kind of clannish, to be honest, so I haven’t made friends with any of them…except for the autistic son of a doctor who lives down the street. This kid is about 30 and sounds and acts just like Rainman. He always wears a fedora and bowtie, and he’s the only one of the whole lot who ever bothers to say hi.  He has wished me “Good Shabbas” many a time on his way to the temple. 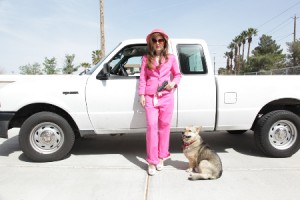 But the rest of ’em probably think I’m a godless shiksa. I wonder why??!! One time, I went to this raging Burning Man party out at one of the dry lake beds in the area, and it was a really windy night. So windy, in fact, that my pop-up camper (in which I was to spend the night) blew over! (It gets really windy here in Vegas…that night, the gusts were up to about 75mph!)

My friend was sleeping in the camper at the time, but he was so wasted that he didn’t even wake up when the damn thing blew over! We had to wake him up, excavate him from the wreckage, and then prop up the remains of the trailer and try to crank it back down (a pop-up camper operates like a Jack-in-the-Box). 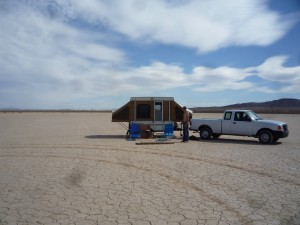 Unfortunately, the jacking struts were irreparably bent, so I had to drive back into town like the Beverly Hillbillies, 20 mph all the way with the busted pop-up still open, swaying to-and-fro. NOT very glamorous!

I got home about 8am and stood in my driveway, hungover and still clad in my gold spandex pants and white chicken-feather jacket from the night before, ruefully surveying the damage. As I contemplated my options, a gaggle of Hasidim passed on their way to synagogue. I could just FEEL their disapproving stares boring holes into the back of my bedraggled, vodka-drenched chicken feather jacket.