Last Saturday night I faced a veritable Sophie’s Choice: should I hit up the Renaissance Faire afterhours party, or go to a secret underground warehouse rave downtown? Hitting up both was not an option, since a) I didn’t get off work til 11pm, b) the Renaissance Faire was waaaaay out in the boonies this year, and c) there is no outfit on the face of this Earth than can go from Rave to Ren Faire. Torn between two parties!!! 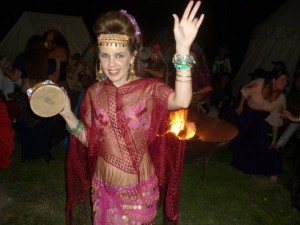 As mentioned, last year I got into the afterhours jamboree at the Renaissance Faire due to a genial drunken pirate friend who had an extra wristband. (Only people in registered “guilds,” a/k/a hardcore dorks, are allowed into the Ren Faire grounds after they close for the evening…so they allocate a certain number of all-access wristbands to each guild.) The pic at left was me last year, drumming and dancing and swigging Charles Shaw from the bottle, and having an all-around awesomely badass time…until the haters in the Parks & Rec department received a “noise” complaint and made us shut down around 11pm. Booooosauce! 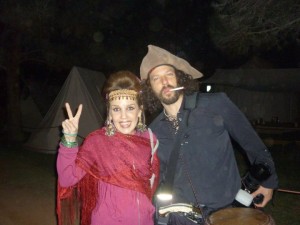 I have since learned, through the Ren Faire grapevine (some steampunk friends of mine, specifically), that the “noise complaint” was filed by none other than Wayne Newton. If you’ve ever flown into Vegas, you’ve seen his sickeningly expansive estate, Casa de Shenandoah, which covers around 20 acres just to the east of the park where the Renaissance Faire is held. His grounds are full of ostentatious displays of wealth, and apparently the cannon fire from the Ren Faire bothered his delicate thoroughbred Arabian horses…..and since Wayne Newton apparently runs Vegas, his displeasure was enough to get the Faire banished to the farthest reaches of Hendertucky, into a depressing suburban softball field near Sam Boyd Stadium. LAMESAUCE! 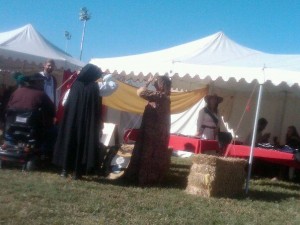 Anyhoo, my kooky pirate friend was out of town, but ANOTHER kooky guildmember friend promised to get me into the party, if I wanted to go. I vacillated between Rave and Ren Faire all night long…but in the end, I eschewed both in favor of going to bed early. Shocking, I know! I did hit up the Renaissance Faire the following afternoon before work…and it was LAME! A buncha fat half-assers waddling around a softball field in sweaty cloaks…no, thanks! Look at the pic to the left — I somehow doubt they had electric fatty scooters in Merry Olde England (although if they did, Henry VIII would surely have owned several). The only cool thing that happened to me there was when some half-naked fatso dressed as Pan came bounding up to me, bleating in my face. I had a quite lengthy one-sided conversation with him about the new location of the Faire, and when it would move back to the old location at Sunset Park — one-sided because he could not/would not talk other than bleating “Mehhhhhh!” in various goat-y intonations. But I totally understood him!

Alas, I heard from friends that the afterhours Ren party was SICK — fire-spinners and bellydancers and lots of mead and whatnot. DAMN!!! I knew I shoulda sacked up and gone. But I was soooo tired. Why, you ask? Well, I’ll tell you!

The reason I was so tired on Saturday night was, my day had started at 5AM!!! You heard me — 5am, the time I’m normally just going to bed! I got up at that ungodly hour to do a gig as a certain furry kids’ TV character at a PBS fundraising event (stop laughing!). Since my face would be covered by 100 pounds of red fur, I didn’t bother with makeup but rolled straight out of bed and headed over to the local PBS station, where I donned my costume and proceeded to entertain the shit out of hordes of excited children…after being schooled by my corporate master on the Do’s and Don’ts of this particular gig (DON’T pose with anyone holding booze, or with any obviously “Vegas” landmarks in the back…bad for the family-friendly corporate image, you know).

It was actually really fun — the little kids would get soooo excited, and run up and give me these huge hugs, which was very cute. Even better, though, were the kids who were FREAKED THE FUCK OUT, but whose parents shoved them in my face anyway: “Say hi, Taylor!” (Taylor: “WAAAAAAAAAAAAAAAAAAAAAAAH!!!”) The only bummer were these snarky Cub Scouts, who were too old to care about my character, and one of whom tried to knock my head off. Also, a Somali-looking smartass kid kept grabbing my ass. But other than that, it was actually really fun! 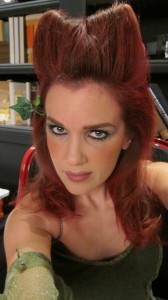 After my mascot gig ended at 10:30am, I had to hurry home and get ready for my next gig, as Poison Ivy in this sexy Batman-themed photo shoot downtown at this fabulous, kooky new bar called the Lady Silvia (theladysilvia.com). One of my photographer friends had lined up a sexy Batgirl, Catwoman, Robin, Joker and some weird latex Harlequin-clad villainess…and he asked me if I could do myself up as Poison Ivy. Could I ever! I went to Sally’s Beauty Supply and got a $3 can of red hairspray, and went to town, using a photo of Uma Thurman on my laptop as a reference. The results came out pretty damn good, if I do say so myself! I can’t WAIT to see the photos!

Then after THAT I stopped at my beloved arepa stand for a snack, and then had to go to work taking photos at the Captain Fantastic show…so by the time all of it was over, you can understand why I was too tired for the Ren Faire or the rave. Oh well, there’s always next year….but arrrgh, how I HATE missing a good party! 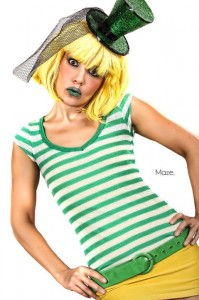 Anyhoo, after my busy weekend, it was time to get down to business and take care of all those annoying little day-to-day tasks…like renewing my prescriptions. There’s only one prescription I really care about, and it’s one that my regular doctor won’t fill…so I had to go across town to a special, progressive doc who was simpatico enough to understand my situation and fill my needs for the low, low price of $100. I’ve had a prescription for this particular medication since 2010, but the State law here requires that you renew it every year. What a SCAM! Aside from the $100 doctor’s visit fee, you also have to shell out $200 in application fees, plus pay to be fingerprinted and have your application notarized. All in all it’s a $330 ordeal…but more than worth it to me, since I will soon be in possession of a state-issued patient’s card that I can wave in the face of any and all nay-sayers. I love being legal — TAKE THAT, ASSHOLES! 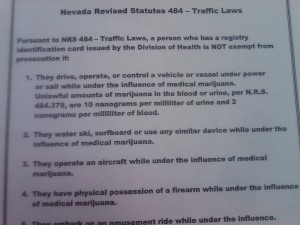 Seriously though, it’s all such a fuckin’ farce that I could hardly keep a straight face. I actually DO use my medication as it was intended — for pain relief, and not recreationally (you probably don’t believe me, but it’s true — I should be the poster child for this program)…but the whole process of GETTING the prescription is a joke. The doc gave me a cursory physical exam, wasting disposable plastic thermometer caps and ear-examiner-thingy caps in the name of giving me a genuine “physical,” complete with blood pressure and reflex checks…and the whole time I was like, can we just cut the bullshit and get down to brass tacks, Doc? But I know how it is — so I bit my lip and played along. My facade only cracked once, when a bearded old hippie who was a fellow patient winked at me in the hall. Pedro’s not here, Man! 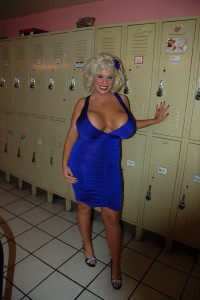 breaking his reverie to get up and sing a Backstreet Boys song. WTF! Then, at midnight, they got the crowd going by starting a game of Musical Dildo — five of us were chosen to get up and toss a rubber butt plug around, and whoever was caught holding it when the music stopped, was out. Well, no big surprise — I was the last man standing. But instead of letting me keep the buttplug (ouch!), they gave me the choice of either a t-shirt or a “mystery grab bag.” OF COURSE I went with the grab bag, which was just a little resin piggy bank shaped like a hippo. But still! It makes a nice memento, and I can use it as a swear jar or something 🙂 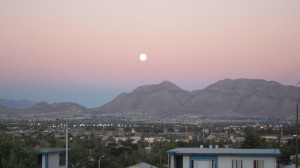 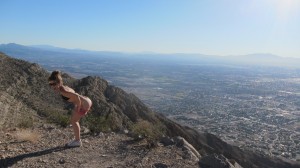 Once at the top, we enjoyed the FABULOUS view (you can see Lake Mead on one side, and all of Vegas on the other), and I mooned the city just to show ’em what I thought. By that time it was getting late, and Samantha and I decided to head back down and go downtown for Quadruple Bypass Burgers at the Heart Attack Grill, which was supposed to finally open for business that day.

Fortunately for us, some Southwest Gas employees were just finishing up some repairs to the electrical towers up at the summit, and they offered to give us a ride back down in the back of their pickup truck. YIKES! Was that ever a bumpy ride…the road was so steep and the gravel so loose, I thought we were gonna careen over the edge several times. Some of the hairpin turns were so tight, they had to back up over and over to make them. But they made it! We got back down to the parking area safe and sound, and now we can look up at Sunrise Mountain from anywhere in town and go, “Oh yeah, I’ve climbed that.” The only bummer was that I couldn’t find the guest book or register they supposedly have up there…I wanted to leave a Wonderhussy sticker in there!

Anyhoo, we went downtown to the Heart Attack Grill…and by that time, we were STARVING! Alas, they still hadn’t opened….but that nutty Doktor Jon was there, and he let me climb back in through the window, although this time we didn’t do any body shots. He wasn’t even wearing his doctor’s outfit this time, because they were in the middle of boring-ass training class for the sexy nurse waitresses he’d hired. But the good doctor did tell me that he had checked out this very blog, and he really enjoyed “reading my articles.” You know how men always say they read Playboy for the articles! But anyway, he seemed really sincere, and said I seemed like a really interesting person. AND he invited me to come down and be the guest bartender one day! Uh oh…..me as a bartender is like having a fox guard a henhouse. Watch out, Fremont Street!

I am a foul-mouthed, flat-chested bon vivant and adventuress who likes to curse, drink, smoke and run around nude, and I refuse to kow-tow to the bourgeois moral code of the day. I’ve lived in Vegas over ten years, and have a few stories to tell. I roll around town in a truck stocked with a Breathalyzer and a swizzle stick, a spare pair of panties and two stun guns. Don’t fuck with me!
View all posts by wonderhussy →
This entry was posted in fetish modeling and tagged batman, hiking, karaoke, mascot, medical marijuana, poison ivy, renaissance faire, vegas. Bookmark the permalink.