IT CAME FROM THE ELECTRIC VAGINA

To every thing, there is a season: a time to weep, a time to laugh; a time to mourn, a time to dance. A time to run around the desert with a blender plugged into your vagina mixing up frozen cocktails…and a time to finance it by standing around a convention center for four days, bored shitless, hawking cheap wedding rings to chintzy jewelers. That’s life! 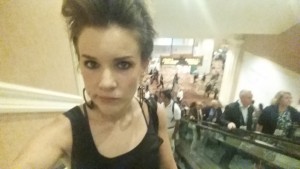 heading into the dreaded jewelry show

Regarding the jewelry trade show — I worked for the same client last year, and it was such an endless, soul-crushingly dull gig that I swore I wouldn’t do it again. But, guess what?? When they called me back about a month ago, I said yes. I guess it’s like childbirth — you forget how bad the pain was after awhile, and next thing you know you’re knocked up again and picking out names.

Why is this tradeshow so odious compared to other shows? The client themselves are OK — I’ve actually become genuinely fond of the crazy Chinese motherfuckers. They’re just doing their thing, grinding out cheap men’s wedding rings in some factory in Hong Kong and selling them to browbeaten rednecks who’ve blown their whole Chick-Fil-A paycheck on their fiancee’s .025 carat diamond solitaire. But the tradeshow itself is another story!

I don’t mind working shows so much if I can stay BUSY, but the jewelry show is a bitch because half the exhibits are closed on Saturday so that the Orthodox Jews can observe Shabbat, and that day is slow as fuck. It was especially bad this year, as my main entertainment was this amazing family of Persian Jews across the aisle — I’m telling you, these people need their own reality show; they were ten times 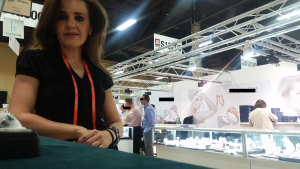 At the jewelry show

more interesting than those schmucks on Duck Dynasty! There was the careworn, hunched little matriarch, her two wheeling-and-dealing sons, the Latin American branch of the family and then the super-swarthy, super-hot little Israeli nephew or whatever who hit on every woman who walked by, buyer or not…myself included! Anyway, without them the day really dragged…but I wrestled every second that ticked by and finally, soaked in blood, sweat and existential self-doubt, emerged victorious from the over-air-conditioned fluorescent-lit tenth circle of hell, clutching an $800 check in my gnarled claw. FREE AT LAST…LAISSEZ LES BONS TEMPS ROULEZ!!!

The main bon temp was our local Burning Man regional campout, where around 800 hippies, ravers and boozers from Vegas and the surrounding area converged on a water retention basin outside Boulder City for three days of drug-fueled mayhem made possible by Wal Mart and the Halloween Superstore. All these Burning Man events pretty much boil down to the same thing: middle-aged white people in tutus and platform boots armed with spanking paddles and travel mugs full of sugary jungle juice wandering through crowds of glassy-eyed raver kids in furry animal hats jerking arrhythmically to earsplitting waves of 200bpm electronic noise wafting from 50 foot stacks of 5,000-watt speakers. Fun times! 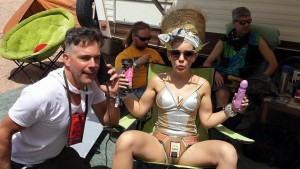 As they say, if you can’t beat ’em, aid and abet ’em…so with that in mind, I decided to step up my game this year and really make a contribution to the party. Normally I just run around in slutty outifts “adding atmosphere,” but there comes a time in a gal’s life when just being atmospheric won’t cut it anymore. So for this event, I decided to create a sort of interactive performance art piece based around the Electric Vagina codpiece I made last year for my short-lived mudwrestling career. I’m not sure why I never thought to wear my Electric Vagina to a Burning Man event before, but I’m here to tell you…it went over great!

IT CAME FROM THE ELECTRIC VAGINA

My performance was this: I dressed up in a freaky sort of space-babe ensemble and walked around the festival grounds pushing a stroller covered by a pink baby blanket, from which emerged a cord that was plugged into my Electric Vagina. To drum up ballyhoo, a couple days prior to the event I had posted a photo on Facebook and Instagram: “IT CAME FROM THE ELECTRIC VAGINA!! What lies beneath the blankie??! Is it some kind of squalling Space Brat?!?!!!”

Hell, no!! I only use my vagina for good!!! In true P.T. Barnum style, at the event I whipped the baby blanket dramatically aside to reveal it was a blender plugged into my outlet! A blender powered by Kegels, penis envy and feminist angst, with which I mixed up frothy, refreshing Vagina Coladas and Vaginaritas for everyone. COME ONE, COME ALL!!! 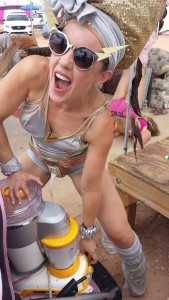 Speaking of feminist angst…just as with the Great Strap-On Experiment of Burning Man 2014, what started as a quasi-feminist statement of empowerment devolved almost immediately into lewd shtick: “Hey Wonderhussy, lemme get some of that pussy juice!” LOLz! Ah, Burning Man…fertile breeding ground for spiritual epiphanies and societal paradigm shifts. They say.

But either way…the fact is, after last year’s tampon string disco ball, I really do have to up the ante at Burning Man this year….so, the Electric Vagina will be coming with me, and you’ll find me serving up icy-cold Vagina Coladas near the Arctica ice stations, afternoons from 3-5. I must warn you though, it gets pretty intense when I’m grinding up the ice with those steely blades — I really put my pelvis into it, squeezing and thrusting and shrieking to the heavens like a woman in the throes of agony/ecstasy. Beware!!

Before Burning Man though, I do need to figure out a way to light up the vagina for nighttime — at the regional campout, my nighttime attire was a gold bodysuit with a ray gun plugged into the Electric Vagina. It made for a pretty bad-ass Barbarella look, especially since I had also spent 3 hours painstakingly crimping my hair ’80s-style…but it would be a really bad-ass look if I could figure out a way to outline the outlet plate, the pin striping and the ray gun cord with some kind of LED lighting! And maybe even a strip of lights running vertically up my bodysuit from crotch to neck! If anyone knows how to do that kind of thing, hit me up…I don’t want to use EL Wire or anything amateurish; I want this to look professional! 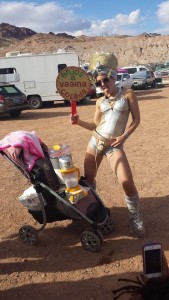 Anyway, speaking of Burning Man…..it’ll be here before you know it, so I guess I’d better get back to work. I’m writing this from a hotel room in Reno, to which I have traveled with my friend Blondie with the aim of hustling for tips at the Street Vibrations biker rally. We did it last October and made pretty good money…so hopefully, things go well again, because I need to make some serious coin before Burning Man. All that piña colada mix and rum ain’t cheap…not to mention the mushrooms!!!

Sigh…better go get tarted up. It is once again a time to gather stones together…so that I can cast them all over the fucking place come August 😀

8 Responses to IT CAME FROM THE ELECTRIC VAGINA