Arrrgh, I’ve been so busy this week that I haven’t had time to change my underwear, let alone update this blog! Basically, I returned from all the fun ‘n’ games at Burning Man and now have to pay the piper…i.e. work. Boo!!!

Fortunately for me, my “work” is usually fun(ish) stuff. Last week there was a PhotoShop convention in town, so a lot of photographers were in town and I did two hotel-room photo shoots in one day: first at THE Hotel, with a really nice man wearing jorts, who also appeared upon closer inspection to have fangs (yikes!)…and then a few hours later over at Treasure Island with another really nice guy who was sartorially and dentally unremarkable. Good times there. 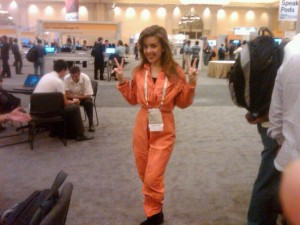 Then this week I worked three days at a BORING-ASS SAP conference. For those of you fortunate enough not to be in the know, SAP is some kind of database management software that big corporations use to keep track of whose souls they’ve bought and sold. I remember using it myself way back in the mists of time when I worked as a cubicle-bot/galley slave at Adobe Systems in San Jose, before I broke free of the Man’s yoke and moved to Vegas. My name is NOT Toby!!!! My name is Wonderhussy!

Anyhoo, there was some big conference for SAP users over at the Palazzo, and I was hired to assist with the “fun” game they cooked up to keep people “engaged” and “educated” (ah, how I detest corporatespeak). I was working for one of my favorite companies EVER, the Go Game (thegogame.com) — these are the guys I do the teambuilding scavenger hunts for, where I play Agent Hotpants or the Bawling Bride. Anyhoo, this conference wasn’t QUITE as fun as one of the usual games…but it was still pretty good times. There was tons of fairly high-quality free food and drink, plus I got to wear an orange flight suit (that’s the Go Game uniform).

Aside from all THAT, I also had to put in a night working at the dreaded show of a certain well-known molesting magician over at the MGM Grand. This show used to be really good money back in the day, but the magician has weakened his once-mighty brand by a)doing too many damn shows (2-3 per day, 40 weeks a year!) and b)allegedly molesting some chick on his private island in the Caribbean. Alas, said magician has never once  tried to molest me…even though I met him a couple times and even assisted him in rehearsing a trick once. What am I, chopped liver?!

So it wasn’t much fun over there…although, by sheer coincidence, one of my friends from New York who runs the Underground Rebel Bingo Club just happened to be staying at the MGM that very night…so after work I went up to his room and assisted him with some promo videos he was trying to record for his Bingo events. If you haven’t heard of it, the Underground Rebel Bingo Club is sort of a subversive rave/party/obscene bingo game that took off in London and NYC…but when they tried to bring it to Vegas, it kinda fizzled. Vegas just isn’t ready for that kinda edgy shit…we like our tits and ass in a more prosaic setting.

Thankfully, I only had to work one miserable night of the molesting magician, and then it was that holiest of all high holy holidays, Mexican Independence Day. Now, many of you rubes might think that Cinco de Mayo is Mexican Independence Day…but Cinco de Mayo is just when they beat the French in some dumb battle. The REAL Independence Day is Sept. 14th, which is when they finally kicked the Spaniards’ asses out of Mexico and succumbed to the rule of the 12 wealthy families that run their country to this day…who are all ethnically Spanish anyway, but whatever! The important thing is, hordes of obscenely wealthy Mexicans flock to Vegas every year and blow MASSES of cash on stupid stuff like baccarat, scotch and souvenir photos…and I’m always there to assist. For the last several years the showroom where I work has booked a certain hotblooded Latino heartthrob to perform for the holidays, and this year was no exception. That guy really brings out the ballers! The men all wear their most expensive Brioni suits, and the women all cake on an extra 5 pounds of makeup (in addition to the 14 pounds they already wear for everyday life) and squeeze into their sluttiest bebe dresses in the hopes of attracting the eye of the Latin Lothario himself, who is known to be an insane womanizer. Seriously, the women literally throw themselves onstage at this guy, and it’s a RIOT to watch! 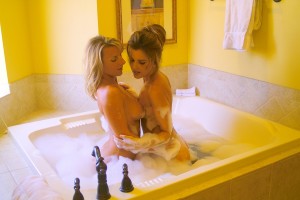 So those gigs kept me busy all week…but I was also on the lookout for future gigs. I’m always looking for more grist for the mill, so last night I went over and interviewed to be part of this guy’s foot fetish website. This ain’t your regular foot site — this guy started one of the very first foot fetish websites back in 2000, and it’s still going strong. He has his models dress up like superheroines and stuff, and then karate-chop each other in the face and whatnot for the enjoyment of the “fans.” Sounded good to me! He’s not shooting anything new til October, though…so I’ve got a while to wait.

Another future gig I’m pondering: my friend and fellow blogger Tatiana, from the Fargo Sisters (fargosisters.com), invited me to join her this winter on one of her kooky stripping expeditions to North Dakota or Alaska or some other remote part of the frozen tundra. This chick has a great business model: she heads out to the sticks, to some little town near a big mining operation or fishing town or someplace where there are a lot of men with a lot of money but no women… and then dances in the local titty bar for a few weeks or months at a time, until she gets bored or the well dries up. FUN! I’ve long thought about becoming a stripper, but I just don’t seem to have the guts to try it. YET! Who knows what the future holds? Wonderhussy in Winter — why not in Minot? What do you think?? Yea or Nay? 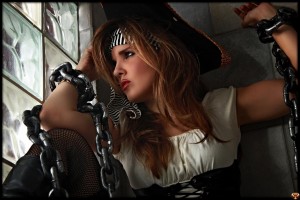 One other future adventure I’m planning for sure is Ye Olde Renaissance Faire. I’ve always been a fan of the costumed nerdiness of the Ren Faire, and last year I finally scored a long-lusted-after invite to the after-hours bash that all the Ren dorks hold after the fair closes to the public. I always WONDERED what kind of crazy shenanigans went on after all the moms and kids left, and all the creative anachronists could get freeeeeaky…well, last year I found out: they PARTY!! I went over there after work last year just in time for this big fireside bellydancing drum circle, and it was AWESOME! Alas, due to a noise complaint we had to quit about 15 minutes after I got there…but it was the best 15 minutes of my LIFE! I was swigging wine from a bottle and feeling fiiiiiiiiiine, until the Man showed up and ruined it all. 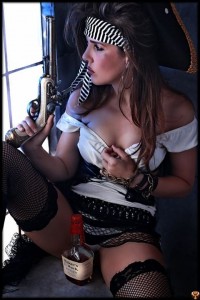 Anyhoo, this year they’re holding it farther out in the boonies, so maybe it’ll be a little wilder. Either way, I made sure to get in good with this kooky guy I know who’s in a pirate guild ( a group of hobbyists who dress up and talk like pirates in their free time), so that I can come along to the guild’s afterhours jamboree at the Ren Faire. A quick word about this guy: he is one of the BIGGEST NUTS I know…and that’s saying a lot! I met him at a photo shoot (he’s a photographer), and the first thing he did was bust out a giant black leather $500 horse-head mask, which he had me model for some extremely freaky photos. Come to find out he used to be an 8th-grade science teacher, but quit that nonsense to immerse himself in the Vegas party world…and pirate culture. Arrrrr! 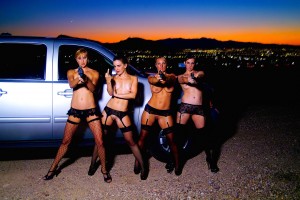 So lastly, here’s a photo from the nude shoot I did a couple months ago with that swinger couple… remember? When they trucked me and a buncha naked models out to this fake ghost town in the desert?? Well, the photographer FINALLY sent me the pics, and they’re great — except for the minor fact that he DIDN’T PHOTOSHOP OUT MY TAMPON STRING!!!!  Seriously?!?!?!? He gets every dimple on the bimbo’s ass next to me, but misses my tampon string. Sheesh!!!!!! 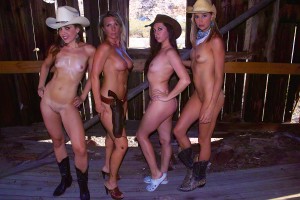 Speaking of kooky nuts, this photographer actually reminds me quite a bit of that other kooky photographer (the pirate one) — this guy has a garage full of crazy wheeled conveyances and contraptions he’s built to get around Vegas; weird stuff like Pegasus Wheels and hang gliders and recumbent bikes. He tools around town armed with a can of wasp spray, which he prefers to pepper spray and mace because it has a far greater reach (it sprays something like 12 feet!). A total kook — but a fun one! 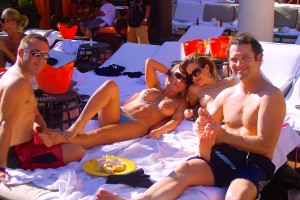 So anyhoo, that’s all for now. In other news, I FIIIIINALLY got an offer from my bank for a permanent loan modification…after 3 years of banging my head on the wall, crying, not being able to sleep, and generally gnashing my teeth and cursing fat capitalist pigs. But that’s not very sexy or glamorous to write about…so never mind! Forget I said anything! Carry on!!

I am a foul-mouthed, flat-chested bon vivant and adventuress who likes to curse, drink, smoke and run around nude, and I refuse to kow-tow to the bourgeois moral code of the day. I’ve lived in Vegas over ten years, and have a few stories to tell. I roll around town in a truck stocked with a Breathalyzer and a swizzle stick, a spare pair of panties and two stun guns. Don’t fuck with me!
View all posts by wonderhussy →
This entry was posted in fetish modeling, nude modeling. Bookmark the permalink.