Graffiti and the Storm Tunnels of Vegas 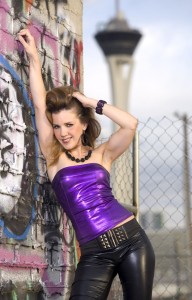 In the shadow of the Stratosphere, by Jim K. Decker

Everyone knows hot babes look best when juxtaposed against rusty shacks, railroad tracks and desert cracks — you learn that shit in Glamour Photography 101. And you can’t browse Vegas portfolios for two seconds without tripping over red rocks, Joshua trees and busted-up airplanes down at the fake ghost town near Nelson; I think it has something to do with the contrast between succulent flesh and a parched, withered landscape. Youth vs. decay…or something like that.

In any event, there’s one more tired and true trope that belongs in every serious fauxteur’s portfolio: graffiti. Every model worth her salt has at least one or two shots humping a cinderblock wall covered in the neon scribblings of some half-witted cholo…it’s practically a requirement to join Model Mayhem! To that end, photographers and models are always asking me where there’s good graffiti in Vegas…so, ever amenable, following are some of my favorite graffiti locations in the area. 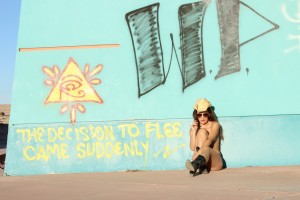 Hands down, the best graffiti I have personally ever seen in the area was at the abandoned Rock-A-Hoola waterpark, down near Barstow. It’s a 2-hour-plus drive to get there, but what a goldmine!! Tons of colorfully painted abandoned buildings, all covered in scathing commentary and thought-provoking slogans; I like my graffiti with a message, and this place definitely satisfies, thanks to an NYC-based crew called Trust-O-Corp. Great job, guys!!! 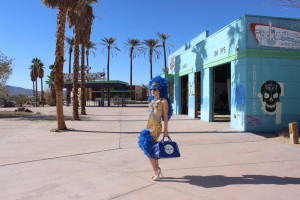 I shot at this location twice, both times in December 2013, and the results were so fan-fucking-tastic that there’s no way I can post them all here. If interested, you can see many more here, here (if you’re on Facebook), and here (if you’re a Model Mayhem member).

Unfortunately, since I shot there, investors have stepped in with plans to reopen the waterpark…and there’s heavier security on duty these days, making it impractical to sneak in for tasteful Art nudes. And anyway, another artist who goes by Aware. has since come in and covered a lot of the cool, colorful graffiti with shitty black Olde-English lettering…so the place isn’t nearly as amazing as it was before. Nothing gold can stay! 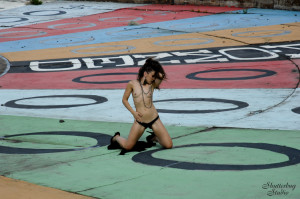 Wheel of Misfortune, by Shutterbug-Studio

Speaking of Aware., I can’t hold his crappy work at Rock-A-Hoola against him because he also created one of THE most amazing graffiti pieces I’ve ever seen, anywhere — the Wheel of Misfortune, right outside town near Lake Las Vegas. I just shot there/blogged about it the other week, so I won’t repeat myself too much…but it’s awesome. A giant, 100-foot circular cement holding tank from an abandoned magnesium mine has been repainted to look like the wheel from TV’s Wheel of Fortune game show…but instead of saying things like “LOSE A TURN” and “BANKRUPT,” the stripes all say shit like “LOSE A HOME” and “BANK-OWNED” — a reflection on our recent local housing crisis. Plus, all the dollar values are $000. Awesome!

Wheel of Misfortune, by Shutterbug-Studio

The only shitty thing about shooting here, aside from the myriad “NO TRESPASSING” signs and an abundance of possibly carcinogenic black soot all over everything, is the scale — the Wheel is so huge that it’s tough to get the full scope of it in a photo where you can still make out the model. In my experience, unless you zoom in and just capture bits and pieces, it ends up looking like an adult version of “Where’s Waldo?”

Near the Wheel of Misfortune, by Shutterbug-Studio

But if you zoom in, you can get some pretty cool shots that still convey the idea. Moreover, there are other circular basins nearby with tons of other colorful, marginally cool graffiti on the walls and stuff….so the Wheel is not your only option.

In the Arts District, by Jim K. Decker

Now, if all this carcinogenic soot and trespassing is too rich for your blood, you can always just be a puss and head down to the Arts District in downtown Las Vegas — the general area around Charleston Blvd. and Main Street has a lot of pretty cool stuff painted on the walls of the various buildings and warehouses in the area. The only bummer with shooting down there is, you’re in full sight of any Looky-Lous or homeless winos who happen by…and sometimes the pedestrian traffic down there can be pretty heavy. So if you or your model are shy, be advised! Also, for that same reason, the graffiti in the Arts District isn’t really ideal for shooting nudes…UNLESS…. 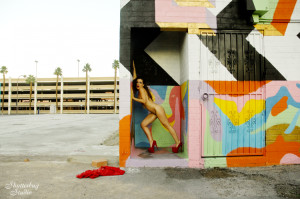 …your name happens to be Wonderhussy, and your m.o. is IDGAF! In that case, blast away, as I did this past February, when I went cruising around downtown Vegas in a pair of high heels and a satin robe, with which I covered my shame until the photographer was ready to go. BAM! I dropped the robe, he got the shot, I threw the robe back around me and we were in the car, on our way to the next stop, before anyone knew what hit ’em. 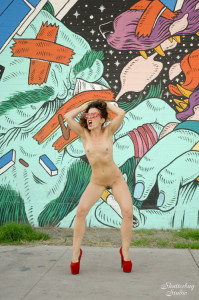 I think it was a weekday afternoon around 4pm when we did these, and we hit about 5 or 6 different locations, both in the Arts District and then further north along Stewart Ave. in Downtown Vegas, where a bunch of super-cool murals were commissioned for the Life Is Beautiful festival last October. We got WAY too many amazing shots to post here, but if interested you can see more here (must be a Model Mayhem member to view).

If you aren’t doing nudes, I don’t think shooting at the LIB murals would be a problem…aside from the aforementioned passing winos and Looky-Lous. Just drive down Stewart Ave. between like 6th and 10th, and take your pick! There’s plenty of street parking, and a 75% likelihood that your car won’t be broken into and your gear stolen. Don’t be a wuss!

Finally, if you’re REALLY not a wuss, and don’t mind risking an encounter with a methed-out homeless hooker’s icepick shank…check out one of my other all-time favorite local graffiti spots, located far beneath the Vegas Strip in the network of storm drain tunnels that cris-cross the city below the surface.

These tunnels were built to channel flash flood waters into Lake Mead — many don’t realize that Vegas gets monsoonal thunderstorms in the summertime, when the sky cracks open and massive amounts of water comes pelting down on the sunbaked desert, which is unable to absorb it all quickly enough, creating hazardous flash flooding. Before the tunnels were built, parking garages on the Strip used to flood all the time, and peoples’ cars would bang into each other like floating bumper cars. It was insane!

Nowadays, the tunnels channel all that rainwater safely into the various area washes, where it eventually flows down into Lake Mead. But on the 360 days a year when it’s not pouring rain, these tunnels have become a permanent shelter for a vast underground population of homeless people seeking cover from the blazing desert sun. A guy I know explored the tunnels extensively, and wrote a book about his experiences interviewing all the various kooks who live down there — check it out! It’s really interesting.

As far as a photo location, these tunnels are somewhat challenging. Aside from the icepick-wielding meth-heads, it’s also SUPER dark down there, requiring lights and other expensive gear that might potentially be appropriated by said meth-heads. The tunnels can also be kinda stinky, and are said to be home to giant cockroaches, crawdads, rats and other subterranean sewer-dwellers. But if you can get past all that, they’re an awesome place to shoot, with some pretty killer graffiti! 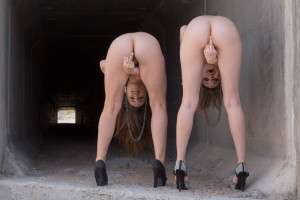 I only shot down there once, a few years ago in the dead of winter — so there were no cockroaches or crawdads, just bitter, bone-chilling cold. Even worse, we shot at night, to better avoid detection when we entered the tunnels by way of a wash near the Rio Hotel…so it was extra cold. And even worse, I couldn’t even really wear a robe or sweater or anything, because I had been bodypainted to look like a crazed post-apocalyptic sewer dweller with monsters on my nipples and teeth on my vagina (this was the only time anyone’s ever bodypainted my labia and clitoris…kudos to you, Suzanne Lugano). 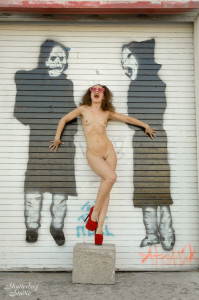 To his credit, the photographer did what he could to make the experience more pleasant for me — he brought along a wagon full of lights, a propane heater and even a boombox so we could listen to music while we shot. He also brought along a second shooter, who, along with the bodypainter, sort of stood guard to make sure no crazy people came up on us from either direction. We must have resembled some kind of far-out Dungeons & Dragons/Goonies adventure party as we set out with our wagon full of gear, the photographer leading the way with a propane lantern, taking us ever deeper into the tunnel until we reached the spot he had scouted out the day before. All in all, we probably trekked about 1/4 mile into the tunnel — where it was pitch fucking black in either direction. Not for the claustrophobic!!

Anyway, the shoot proceeded without incident, and we ended up getting a killer photo out of it, so it was definitely worthwhile. But even if we hadn’t gotten any good photos, I would still have enjoyed the shit out of it…because talk about an adventure! People don’t realize it, but I’m actually only 25% model, 75% adventuress. In my book, half the time the journey IS the destination….ya know? So if you ever want to hit up any of these (or other, as-yet-undiscovered locations)……

Have truck, will model!

YOU KNOW WHO TO CALL!

9 Responses to Graffiti and the Storm Tunnels of Vegas