Without question, the most F A B U L O U S ghost town I have ever shot in! 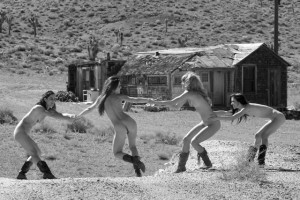 Gold Point is off U.S. 95, about 3 hours north of Vegas. But it’s totally worth the drive — an astonishing collection of weathered wooden buildings, rusted out old cars and machinery, and an assortment of old-timey bric-a-brac that would make even the Antiques Roadshow guy cream his pants!

The story behind Gold Point is the best part: a McDonald’s manager named Herb from the Sacramento area was obsessed with ghost towns, and spent all his free time scavenging around ghost town sites in search of treasures. He finally scraped together enough money to buy the site of Gold Point — which, at the time, was little more than dilapidated ruins. But Herb moved there anyway, and on one of his resupply expeditions into Vegas (the closest town with any real grocery stores) he hit a Royal Flush jackpot at some locals’ casino — and won something like $100,000!!! Unlike most lame-O gamblers, he used the money for good — to fix up the ghost town of Gold Point, to the point where you can now rent a cabin and stay there overnight! 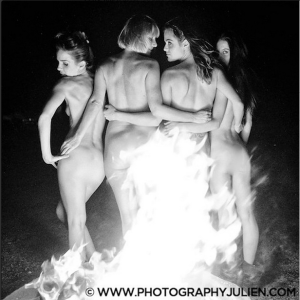 Herb also made himself the Sheriff of Gold Point, and his buddy/co-investor Walt is the bartender at the saloon — yes, there is a fully-functioning, donation-only saloon on the premises. The whole town is an unbelievably cool place to shoot photos, and they are very tolerant of nude photography…even allowing us to shoot nudes inside the saloon 🙂

I can’t recommend this place enough — even though it does leave a slightly sour taste in my mouth. I first discovered the place on a photo shoot, when these two guys from back east had hired four nude models to frolic around for two days; none of us nude models had ever met before, but we hit it off so well we formed The Goddess Collective, a sort of co-op of art nude models who help each other out getting gigs, finding places to stay, etc. 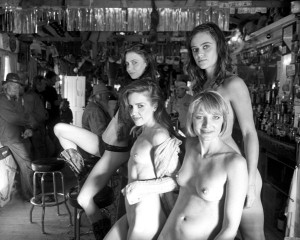 In the saloon at Gold Point, by P. Julien

All of us had such a great time that the guys said they couldn’t WAIT for us to do it again. But two years later, when they did come back…they only hired 2 of the four of us back 🙁 And I was not one of them. Oh, well….can’t please everyone!

Anyway, I still love Gold Point to death, and would (and HAVE) come back here in a hot minute! The 3 hour drive is totally worth it….and besides, you also pass the abandoned brothel on the way 🙂

*NOTE* a photographer recently informed me that they charge a substantial fee to shoot photos here. So you definitely want to call ahead and see what kind of deal you can arrange, before heading out there!