The pen is mightier than the sword! As the author of this groundbreaking, life-changing blog, I can certainly attest to the veracity of this old saw. Whether by Bic or by kick, I will fuuuuuuck you up!

I did a fabulous photo shoot today with one of my all-time favorite photographers, Randy Fosth of Shutterbug-Studio. He knows what’s UP — unlike many hobbyists and perverts I shoot with, he learned photography the old-fashioned way, growing up on a farm in Michigan with no one to talk to but the crazy old photographer on the next farm over, who taught him everything he knew about light, exposure and composition. This was in the film days, so every shot counted…and with Shutterbug, it still does!

Now I’d like to tell you about the 2nd Amendment — I fully support the right to keep and bear arms, as you can see in the photo! Har har, but seriously, folks…I do own a handgun, and I was an NRA member until their jingoistic posturing annoyed me enough to quit. I’ve been to my fair share of gun shows, mostly to marvel at the rednecks, kooks and conspiracy theorists…mostly under the aegis of my ex-brother-in-law, who is a cop and who fostered my fledgling interest in weaponry. He convinced me to buy a Sig Sauer .9mm, which I fondly refer to as “Rutger Hauer der Sig Sauer,” and which I keep nearby in a handy hidey hole. Don’t fuck with me, I said! If you’re interested, here’s an article I wrote about the Vegas gun show for one of the local alt-weeklies.

Now here’s one of the seven wigs I bought the other week from my #1 all-time favorite website, ElectriqueBoutique.com. Shhhh…I want to keep this site a secret! They have all kinds of cool shit for dirt cheap!

The labia purse I got around 10 years ago as a Christmas gift from my stepmom…always wanted to use it in a shoot, and now I finally did! The boots I bought around 12 years ago at Nordstrom in California. While I was trying them on, some  middle-aged perv watched me with lust in his eyes from across the store, then followed me across the mall until he worked up the courage to invite me for a drink at Chili’s.

Over drinks, this man I had known for all of 5 minutes invited me to come to Vegas with him! I said no, but moved here myself about a month later. Who needs a perv to take you when you can pack up and move yourself, creating a fabulous new life along the way?? 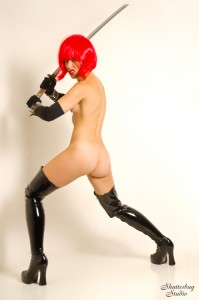 Did I mention not to fuck with me? I’m on Day 13 of my sleep restriction therapy, which means I haven’t gotten more than 5 hours sleep in two weeks. YAWN! Poor Shutterbug had to Photoshop the hell out of these pics just to get rid of the bags and broken-out, worn down skin on my poor, exhausted face. Fuckin’ insomnia! 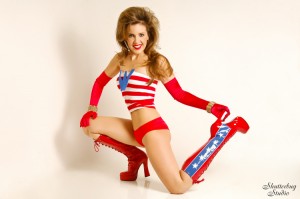 Speaking of insomnia, here is a list of everything I’ve tried thus far in my 16-month battle:

So far, I am batting a big, fat zero. Nothing seems to help, but I have to keep trying. Next up: edibles…I’m gonna make a big batch of Rice Krispie treats tomorrow and see if that helps. They say that the effects from edibles are longer-lasting than other ways of medicating, so we’ll see.

After that, my only other idea is biofeedback…which costs $1700, but I AM DESPERATE! They say Michael Jackson was a terrible insomniac, and would have spent any amount of money to get a good night’s sleep. That’s how come he ended up taking Propofol, and dying from it 🙁 Other famous insomniacs include Marilyn Monroe, Elvis Presley, Heath Ledger, Drew Barrymore and Eminem…most of whom died young as a result of abusing anti-insomnia pills. YIKES!

You can see why I’m loath to keep taking pills. None of ’em work well, anyway, so I figure I’m not losing much by quitting ’em. As mentioned I’m on Day 13 of my sleep restriction therapy course, but I’m not sure how much longer I can/should continue. It doesn’t seem to be helping, and I’m getting REALLY worn down. The way it works is, you only allow yourself to stay in bed for a minimum period of time, until your body ends up so tired that you start sleeping that whole period. I chose a 6-hour  period from 2:30am-8:30am, and it’s TORTURE! I’m blathering on right now on this blog just because I have to do something to stay awake — otherwise I’d nod off, and fuck up the whole experiment.

That’s the irony — I am soooooo sleepy at night, and I fall asleep right away — within minutes. My problem is, I then wake up between 1-4 hours later, and am unable to sink back down into deep sleep — the best I can do is a sort of half-assed stage 1 doze that is NOT very restful. It’s not that my mind is racing with thoughts and worries…it’s just on, like a TV set turned to a static channel. And I CAN’T SHUT IT OFF!

This all kicked in out of the blue after I went to Burning Man two years ago. At the time, I felt that my brain was like a faulty hard drive, skipping and skipping and unable to get back into the groove of sleep. I don’t know if it’s caused by my unstable financial situation or what, but it makes this trying time in my life EVEN MORE TRYING!

I’m hoping that it will resolve itself on its own, after my problems all work themselves out. But who knows if that will even happen?

It reminds me of a conversation I had with my all-American hero friend, with whom I went on a good old-fashioned dinner-&-a-movie date the other night. I really like this guy! We went and saw the awesome movie “Beginners,” which is about two aimless sort of confused 30-somethings, and it totally spoke to me. At dinner afterward, my date asked me how my memoir writing was coming along, and I told him that I was almost done…which is a big problem, because I didn’t know how to end it. What do I do to wrap it up, when there has been no epiphany or resolution in my life?? I suppose I could make up a happy ending, I mused…

“Well, what would your happy ending be?” my date asked.

I felt so clueless and adrift — I don’t even know what a happy ending would BE for me! Now, that’s pathetic.

I suppose I could write that the bank modified my loan to a manageable sum, and my insomnia went away, and I developed the determination to learn to write music and wrote a hit song, toured the world, wrote a critically-acclaimed best-selling memoir about my adventures, had it made into a fabulous movie, and became the toast of the town.

But I’d probably still be adrift. Some people are NEVER happy!

I am a foul-mouthed, flat-chested bon vivant and adventuress who likes to curse, drink, smoke and run around nude, and I refuse to kow-tow to the bourgeois moral code of the day. I’ve lived in Vegas over ten years, and have a few stories to tell. I roll around town in a truck stocked with a Breathalyzer and a swizzle stick, a spare pair of panties and two stun guns. Don’t fuck with me!
View all posts by wonderhussy →
This entry was posted in Uncategorized and tagged boots, insomnia, modeling, vegas. Bookmark the permalink.