The crumbling stone ruins of a once-bustling mining town, about three hours northwest of Vegas via roads that get progressively worse — the last part definitely requires high-clearance and 4WD .

the road to Delamar

Once you leave the pavement (from U.S. 93), you follow a pretty good dirt road through an astonishingly dense forest of Joshua trees. There is also a massive dry lakebed nearby, which because of its remote location is fairly pristine and unmarred by redneck tracks, beer cans, shotgun shells, etc.

Overview of the valley

The ghost town is in a desert valley dotted with yucca, cholla and Joshua trees. There are stone remains of probably 10-15 buildings, plus lots of rusted metal mining detritus and a few cars. There is a lot of old broken glass and pottery and stuff in the ruins of the buildings — fun to sift through!

In its heyday around the turn of the century, Delamar had a population of 1,500 and was a profitable gold mining operation — although the gold was embedded in quartzite, and so many miners died of silicosis from breathing the dust that the town’s nickname was “The Widowmaker.” 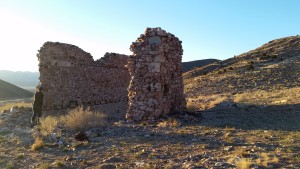 there are tons of stone ruins out here!

Nowadays, Delamar is a super-quiet, remote place to camp out for free — there are several makeshift campsites scattered around, with beautiful views of the ruins and the valley. Due to the remoteness of the location, the stars here are fantastic at night. So if you’re looking for a spot to do night sky photography or just a cool place to shoot art nudes undisturbed…it’s a great spot!