Am I a Prostitute? You Decide!

While I was trying to decide whether or not to do that sex seminar gig, I got a lot of input from friends and  Facebook “friends.” Almost every single person advised me not to do it, and one of the main reasons given was that it sounded like prostitution.

Why the big fuss about/taboo against prostitution?! I have no moral or ethical opposition to that storied profession…in fact, the only reason I’m not raking it in as an escort is that I couldn’t stomach having sex with physically repulsive men. I’m fairly easy once you get some wine in me… but even I have my standards! I don’t know how the Las Vegas Courtesan does it.

We’re all prostituting ourselves in one way or another — creatively, financially, whatever. Hookers just do it in a more straightforward manner than the rest of us. God bless ’em for it!

Anyhoo, what I’m really interested in is the exact definition of prostitution. According to the law, it is “the commission by a person of any natural or unnatural sexual act, deviate sexual intercourse, or sexual contact for monetary consideration or other thing of value.”

I think I actually might already be a prostitute, according to this definition. Most of the wacky fetish things I’ve done were sexual in nature — even if the guy didn’t bust his nut in my presence, but waited until after I’d left. So I wonder if seed must be spilled for it to become illegal. Consider the following examples from my personal history, and decide for yourself: Prostitute or Not a Prostitute?

A couple months ago I posted a blog about this foot fetish photo shoot I did in a guy’s room at an off-Strip hotel. I sat in a chair, fully clothed, watching Jersey Shore while he photographed my feet in various pairs of shoes, and then at his request I videotaped him sucking all the dirt and grime off my bare feet. Then he asked me to kick him in the nuts a few times, which I did with relish, and he paid me $200. Both of us were clothed through all of this, but I’m sure he jerked off after I left…if not right then and there, I’m sure at some point. Was that an act of prostitution? 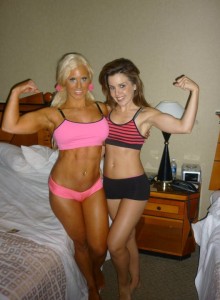 Another time, I got involved with some female bodybuilders who do fantasy wrestling sessions with guys who pay upwards of $300/hour for the privilege of wrestling with strong women. This one chick referred me to one of her regulars, and he hired me to do a “Strength Challenge Session” in his motel room across from the Hard Rock. I wore workout shorts and a sports bra, but he offered me extra money if I would wrestle topless. Meanwhile, he left the curtains to the motel room open, so anyone walking by would have seen me grappling topless on the bed with this weird little old man (he was a mathematics professor from England, a verrrrrry strange fellow with wire-rimmed glasses, Einstein hair and terrible garlic breath). It was legitimate wrestling — he did not go easy on me or try to molest me, just wrestled. But I’m assuming he must have jerked off or something after I left…otherwise why spend all that money wrestling a woman? So, though no seed was spilled during our session…was THAT an act of prostitution?

And how about this one: every month there’s a big foot fetish party here in town, where foot fetishists pay $60 to come into this swingers’ club filled with models, and then purchase ten-minute sessions with the various models’ feet for $20. Nudity and sexual contact are prohibited, so the contact is limited to toe-sucking and foot-rubbing. But it’s as obvious as a bunion that the guys are paying for something that sexually arouses them…and indeed sometimes after a session they go out to the parking lot to “get some air,” which I’m assuming is code for “jerking off.” If I allow a random perv to suck my toes, is that prostitution? What if I were to smush my feet on a guy’s face and let him sniff them as I laid back and daydreamed, while unbeknownst to me he started jerking off? After awhile I may have noticed he was doing it, but say I felt sorry for him and didn’t have the heart to cut him off. Seed was spilled (not on me), but no genital contact was made. Was THAT prostitution?

Speaking of the foot fetish party, one well-heeled, professional partygoer once offered to hire me for a private session in his high-rise condo, wherein he would pay me to come over and let him sniff my feet for one hour, then stand by while he jerked off. He stressed that I would not be required to touch him or have anything to do with his nutbusting…but it sounded a little too freaky for me, so I never did it. If I had, would that have been prostitution?

I also had an offer once to go over to this guy’s room at vacuum his entire body with a vacuum-cleaner attachment. Seriously. Nothing sexual, just attacking his back, crack and sac with a vac. I didn’t do it (I was too shy at the time)…but if I had, how about that one?

I’ve also had my share of older men who wanted to “take care of me” and buy me stuff, help with my bills, etc. in exchange for sex — what you would call a sugar daddy arrangement. Sounds like prostitution to me! Even though you’re not being paid a specific amount for a specific action, it’s all the same.

What it all boils down to is, I guess I don’t sanctify sex…to me, it’s just another thing you do, like eating a cheeseburger or brushing your teeth. The only difference is it can create life — which since I’m an atheist, I don’t so much see the holiness of anyway.

Now, about that sex seminar: Ari (the guy running it) was very disappointed that I decided not to participate, but there were no hard feelings on his part. In fact, he offered to let me come peek in on one of the sessions, so I could see for myself that it’s legit, and maybe change my mind and work for him at some point in the future! I can’t wait, because despite the hysterics of my friends and “friends,” my gut feeling is that it was a totally legit (although unconventional) gig, and I am excruciatingly curious to find out more about it.

He also offered to compensate me for my time spent auditioning with him the other night…which I declined.

Becuz that would be prostitution!

I am a foul-mouthed, flat-chested bon vivant and adventuress who likes to curse, drink, smoke and run around nude, and I refuse to kow-tow to the bourgeois moral code of the day. I’ve lived in Vegas over ten years, and have a few stories to tell. I roll around town in a truck stocked with a Breathalyzer and a swizzle stick, a spare pair of panties and two stun guns. Don’t fuck with me!
View all posts by wonderhussy →
This entry was posted in Uncategorized and tagged fantasy wrestling, fetish, foot fetish, prostitution, sex, vegas. Bookmark the permalink.

15 Responses to Am I a Prostitute? You Decide!