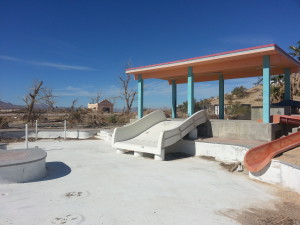 This once-thriving waterpark operated as a campground and watersports recreation area initially known as Lake Delores from the 1960s through the 1990s, finally closing down in 2004 when someone was paralyzed in an accident on one of the slides…and has just sat there rotting in the baking desert sun ever since. It’s one of the most bizarre sights you’ll ever see — a waterpark, in the middle of one of the most barren, desolate stretches of the Mojave Desert. Who the fuck thought THAT was a good idea?! (Apparently, there is a large underground springs in the area which fed the lake…hence the name of the nearby town of Newberry Springs.)

Rechristened “Rock-A-Hoola” in an attempt at drawing in 1950s-loving Route 66 tourists, the park sits right off I-5 between Vegas and Barstow. I had driven by it a billion times over the years…each time vowing I would figure out a way to get in there. I mean, it’s so post-apocalyptic and cool!!! But the access is somewhat tricky, since the closest exit (Harvard Rd.) is a ways off, and you have to take a 2-lane frontage road to get to the park.

I finally went out there for a photo shoot in November 2013, and found the place to be just as fabulous as I’d anticipated, if not more so. Most of the water slides themselves have been sold off, so all that’s left is some spindly support poles, abandoned buildings and empty pools…covered in the most amazing graffiti you’ve ever seen. Not the usual halfwitted cholo scribblings — I’m talking pro-status graffiti, with social messages and shit. It’s incredible!! 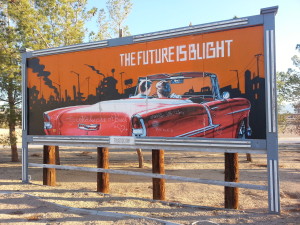 There is a chain-link fence surrounding the park, with very infrequent “No Trespassing” signs that can easily be “accidentally” overlooked by the intrepid desert explorer. If you have 4-wheel drive, you can pretty much just drive right in and park behind one of the old buildings, then wander around at will. There doesn’t appear to be any homeless people or radioactive zombies living there…although I’ve never stayed after dark. I think there is some kind of 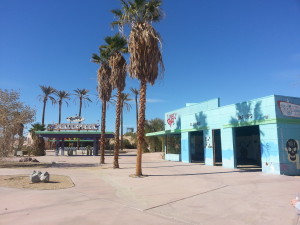 creepy methhead caretaker who lives nearby, but I’ve done two fairly long photo shoots and he never bothered me either time. If you do see him, he could probably be bribed with $20 or a 12-pack of Mountain Dew.

The eerie beauty of this place is pretty much indescribable, so I’m only posting a few pics here. If interested, there are many more on my Facebook page and in my original blog entry describing my first foray here.

For photographers, a few samples of glamour shots that can be gotten here: 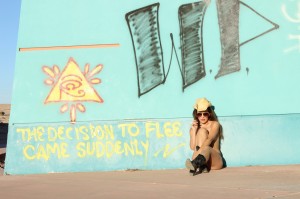 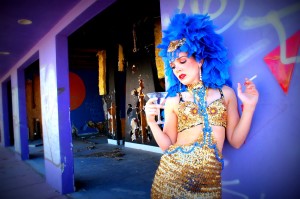 UPDATE 4/22/15: Some dimwitted asswads have since gone in and sprayed over all the cool, colorful graffiti with ugly black paint 🙁 It’s nowhere near as cool a place to shoot nowadays, and besides…I also heard they’re planning to re-open the waterpark, so there might be more 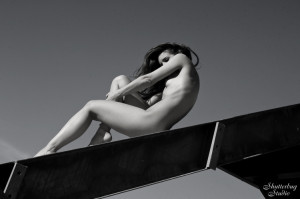 security there now. Be advised!