A Whore in Public and a Lady in the Bedroom 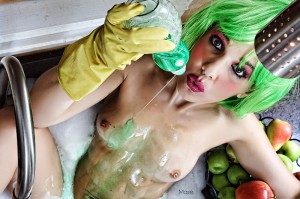 Haven’t updated in awhile, because unfortunately… I haven’t had any inordinately titillating experiences lately! No sex seminars, no ballsack-kicking foot fetish photo shoots. It’s been a dry week in Vegas!

On the plus side, this down time allowed me to FINALLY finish writing my fuckin’ memoirs. You’ll recall that a friend challenged me to a literary duel, wherein we both had to finish a rough draft of our books by July 31, upon penalty of attending church for 8 weeks. Well, it took 80,000 words, but I finally got the fucker down….On the Road-style, where I basically just sat down and banged it all out in a continuous stream of word-vomit. I did organize the stream somewhat into ten easy chapters:

1. How I abandoned my boring corporate life in Silicon Valley, bought a pink 1986 Lincoln TownCar named Chairwoman of the Board, and moved to fabulous Las Vegas

2. Tales from the basement of various Strip hotels, where I have labored as a souvenir photographer for 10 years, and stories about the creepy meth-headed subterranean photo lab employees

3. My short-lived career as a light-up-yo-yo-wielding cigarette girl working graveyard shift at the Flamingo…talk about freaks 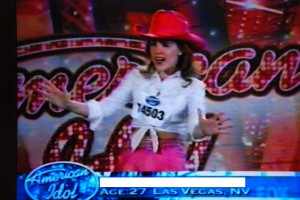 7. My ill-advised purchase of a super-badass old house in Vegas, and the creepy one-legged, toothless hillbilly pornographer roommates I’ve had to suffer in order to keep it 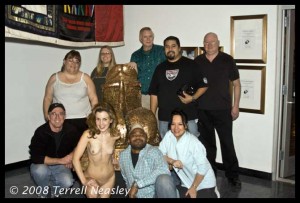 8. My shameless adventures as a nude model, and all the creepy/perverted/weird old fuckers I’ve shot with

9. My shameless adventures as a fetish model, and the straaaaaaaange things I’ve been paid to do

10. My ill-fated exploits as an adult nightlife reporter 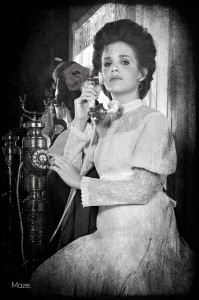 Anyhoo, if you’re interested in reading it, I’ll happily send you the Word doc so you can critique it for yourself.

So I got all that shit done just in time to get back to the business at hand: partying and having more adventures! I did a photo shoot with one of my fave photogs, Michael Maze, on Monday night. Now, this was the day after my shoot with Shutterbug Studio, so I had already blown my creative wad on that, so to speak — I used up all my costume ideas. But I really wanted to shoot with Maze, because he’s been having a terrible month — he just suffered a personal tragedy with the untimely death of his young daughter in a boating accident, and he wanted to shoot to keep his mind off the pain.

So I went to the dollar store and looked around for inspiration…and came up with some badass ideas! He hasn’t gotten most of the photos back to me yet, but I’ve included a couple in this blog. The top one came about when I was looking through the bag of wigs I just bought for Burning Man, and my eyes lit on the green one, which was the same shade as a bottle of Palmolive dish soap. I instantly had a vision of me, naked in my kitchen sink full of soap suds, wearing nothing but the green wig, bright yellow gloves and hot pink lipstick…pouring radioactive green Palmolive all over myself. Good, clean fun!

The second one is me goofing around in my hippie mom’s old Gunne Sax wedding dress. I’d been wanting to do a Gibson Girl hairdo, so I rigged that up with pipe cleaners and Aqua Net, and dragged in this old-timey phone my ex-boyfriend got me at a Goodwill store in Portland, OR.

Speaking of Gibson Girls, this meddlesome old yenta I work with at the photo lab, who’s been a souvenir photographer since the days of the Elvis Presley show (!!! I don’t know how she’s done it that long; I’d have gone insane looooong ago) is always giving me advice: romantic, financial, photographic, etc. She means well and I really like her, so I always listen to her advice with at least half an ear. Well, when I mentioned my Gibson Girl photos, she got all riled up and told me that if I’d only be a Gibson Girl in public and a “femme fatale” (her words) in the bedroom, I could have ANYTHING I WANT!

That’s not to say I’m totally square — I have jerked off a boyfriend or two in the darkness of an adult movie theater, with panting old men looking on in the gloom. And I enjoy hanging out at sex clubs — but more for the people watching; I’ve never actually had sex in public. But I have had my share of outdoor sex, car sex, road head and once I even did it on a log by a river, deep in the Venezuelan jungle. So at least I’m trying! 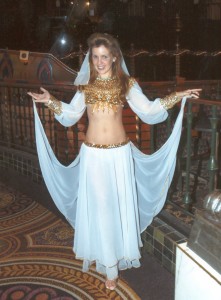 So anyway, back to my week. After finishing my book, I got back into the mix and started hustling again. My odd gig of the week was as a sort of Roman slave girl at a certain fabulous Strip hotel that was hosting a baccarat tournament, and needed two babes to stand out front and greet the players — mostly grumpy Chinese and lascivious Latin Americans. I’ve done this gig several times before, and while the work itself is somewhat boring, I loooooooooove the costume, and I love posing for photos with tourists all the livelong day. One of my girlhood ambitions was to play Snow White at Disneyland…but unfortunately, due to my foul mouth I never was able to score that sweet gig. So I have to settle for this.

My favorite part about the gig is going into the costume room to get dressed. It is FABULOUS! Keep in mind, this hotel has been around since 1966, and some of the costumes have been in use for 30 years or more. In addition to slave girls, they also have an Emperor and a Queen who stroll around the casino, posing for photos in the company of a beefcake Centurion (they used to have two Centurions, until the economy tanked and the budget was cut). The Queen’s costumes are BAD-ASSSSSS, in particular the headdresses, which are fabulous (if not  historically accurate ) Bob Mackie-eque concoctions of sequins and feathers — but alas, the height requirement to play the Queen is 5’7″ and I’m only 5″3″ 🙁 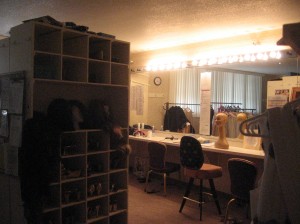 But the slave girl costumes are great, too, and everything is very well taken care of by this little old Mexican lady who is like the Costume Priestess — she spends her days laundering panties, mending hemlines and re-attaching golden rick-rack. She also helps the characters get dressed, kind of like an old-time handmaiden. Really cool!

One time, I was in there getting dressed in my slave girl ensemble, when the guy who was playing the Emperor called out from the men’s dressing room next door: “Handmaiden! Come help your Emperor put on his cape!” His tone of voice was overly imperious for an unemployed actor earning $20/hour as a fake emperor at a casino, but I forgave him — when you’re wearing a fabulous costume like that, it’s easy to forget that you’re really a broke hack subsisting on Top Ramen and whatever slop is on offer in the Employee Dining Room.

Anyway, the other chick  I was working with was super cool, a dancer who just moved here from L.A. and was looking for ways to earn a quick buck. She’s been working as a go-go dancer in one of the lower-end party pits in town, but had the brilliant idea of rigging up some slutty biker bitch outfits and heading out to Sturgis (the huge biker fest in South Dakota next week) to earn tips posing for photos with drunken bikers. I’ve worked biker events before, so I know there’s a TON of cash to be made off those generous drunks! She invited me to come along, but alas I have this dumb thing called a photo job, and I can’t just take off. The mannequin waits for no one…

The only other thing I did this week was attend a Yelp! party. Due to my witty and fabulous Yelp reviews, they recently elevated me to Elite status…which means I get invited to all their free food & booze parties. This one was at the Hard Rock Cafe on the Strip, and had an 80s rockstar theme — so I broke out my leopard-print spandex pants and headed over for a night of fun with my All-American hero friend.

This was actually the second 80s-rockstar-themed party I was invited to this week — the night before, I was invited to an event at the Riviera hosted by a guy who used to read my old blog back in the day. He found me on Facebook, and now we’re friends again. His name is Bong Jovi and he’s a real hoot…but alas, I was too tired to attend his party, and instead just met up with him for drinks one night in the fabulous Spiegelworld Beer Garden out front of Caesars Palace (my favorite summertime place to hang out).

Now speaking of being tired, I quit that bogus sleep restriction diet because it wasn’t helping the insomnia and was just making me miserable. So now I’m back to not sleeping well, but I have a new strategy for dealing with it — pretending it doesn’t exist! I won’t be bitching about it on here anymore, except to say that one of my readers, who is a chiropractor, advised me that it could be caused by a spinal misalignment…and recommended a local chiropractor for me to visit. So I’m going there right after I finish writing this, just to see if it helps. Another $100 down the drain, I’m sure…but I’m one of those poor desperate suckers who will try anything!

I am a foul-mouthed, flat-chested bon vivant and adventuress who likes to curse, drink, smoke and run around nude, and I refuse to kow-tow to the bourgeois moral code of the day. I’ve lived in Vegas over ten years, and have a few stories to tell. I roll around town in a truck stocked with a Breathalyzer and a swizzle stick, a spare pair of panties and two stun guns. Don’t fuck with me!
View all posts by wonderhussy →
This entry was posted in Uncategorized and tagged modeling, vegas, yelp. Bookmark the permalink.