A Fabulous New Discovery in the Desert! 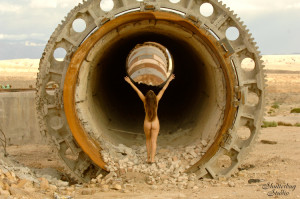 I have a lot of unique desert locations I use for my artistic nude photo shoots; if you hire me for a shoot, I can take you to places like rustic old wooden buildings, dry lake beds, Joshua tree forests and red sandstone wonderlands. But to keep things fresh, I am always on the lookout for interesting new places! And since the desert is full of weird stuff, all it takes is a little exploring. 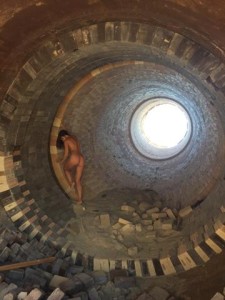 inside the tube
By Kimber Collins

With that in mind, last Wednesday my friend Randy Fosth a/k/a Shutterbug Studio and I went out adventuring, scouting for new photo shoot locations — preferably within an hour’s drive from the Strip, to keep things feasible for visiting photographers. We meandered around the Mojave Desert all day, stopping here and there at an abandoned motel, a hot spring and an old town site…before finally stumbling upon an amazing find: a GINORMOUS abandoned mine, rusting away in the baking desert sunshine less than an hour from the Vegas Strip! 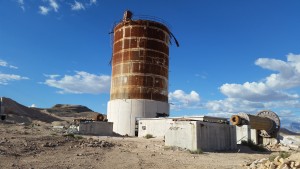 The scale of this place absolutely took my breath away: it is GIGANTIC! I have no idea what they used to mine (or mill, I’m not sure) here…but whatever it was, they did it on a pretty grand scale. The remains of the rusty old machinery is huge, on a scale so large that it can be overwhelming to a photographer, at first. But upon closer inspection, this is a fantastic place to shoot! 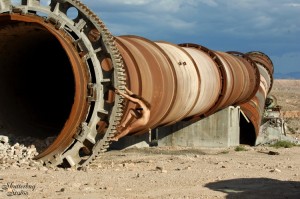 The first thing you notice is this ginormous rusty metal pipeline, cut into two pieces, that dominates the landscape. The rust patterns on the outside are beautiful at golden hour, and the inside is lined with beautiful fire brick, infused with gorgeous filtered light coming in from each end. It almost looks like the Roman catacombs — if the Romans had sent them into Outer Space!!!

There are huge sprockets at the ends of the pipes, which are very easy to climb up on, and make for a surreal, Stargate-like portal. The variety of photos that could be taken here is endless — Mad Max/post-Apocalyptic, Steampunk, rock bands…and of course, art nudes 🙂 Very versatile! 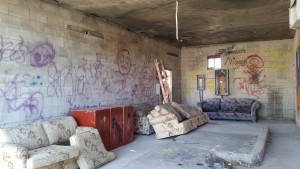 Aside from the giant pipes, there are also several concrete outbuildings scattered about; most of these house the remains of computer mainframes and control panels, and are not overly photogenic. But there is one building with a bunch of old sofas inside, and some fairly decent, colorful graffiti on the walls — and since one of the walls has been knocked down, the light is pretty good. There is also some interesting honeycomb-patterned sound-proofing on the doors. 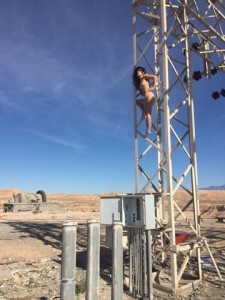 There’s also a huge old electric transmission tower, long defunct, with the ceramic insulators all shot to pieces, laying in broken chunks on the ground (this area is apparently popular with target shooters and other local rednecks, as there are shotgun shells everywhere). Since it’s no longer electrified, it’s a great structure for climbing!

The tallest building at the site is this silo-like rusty metal tower, that apparently used to house some sort of super-loud generator or something — there is still a sign on the outside, warning that ear protection is required. Inside, you’ll find a bunch of exposed plumbing that is excellent for industrial-type art nudes. The only downside in here is that everything is covered in a thin film of white dust that will get all over you; in fact, the entire area is pretty fucking filthy, and you will feel the need for a boiling-hot bath or shower after rolling around naked at this site. 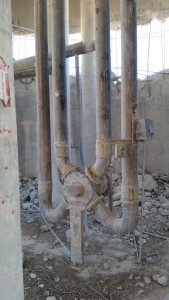 I’m not sure what was mined/milled/processed here, but whatever it was, the remaining debris and dust is undoubtedly bad to breathe — so beware! You don’t want to wind up with a case of silicosis, all for the sake of shooting some arty T&A. One of the huge pipes in particular is lined with a thick layer of this fine white silty stuff…so be advised. But I don’t think there’s anything overly toxic at this site, since there are no warning signs posted and the property is not even fenced. In fact, the only signage indicates that it’s on public land, and is open to target shooters — as long as they clean up after themselves (which they do not; as mentioned, the ground is littered with shotgun shells) (SHOCKER!).

All they ask is that you clean up after yourself

So basically, other than dirt and possible contamination, you don’t really have to worry about shooting nudes here. On both my visits the site was totally deserted, and it’s far enough from any town that the likelihood of your being bothered is pretty slim…even though the access road is fairly easy to navigate, even in a regular car (it’s paved, but in severe disrepair…so just drive slowly and you’ll be OK).

Overall, this is my new favorite shooting location; it’s remote, bizarre, and beautiful in a very unorthodox way. I love it!! Hire me for a shoot…….and I’ll take you there 😀

9 Responses to A Fabulous New Discovery in the Desert!